The cover of Detective 185 (July 1952) asks, what is the secret of Batman’s utility belt?  The story by David V Reed and Dick Sprang answers that – his secret identity is inside.

While he doesn’t go so far as to sew labels into it, Batman does create a disc with his name and address.  Incidentally, this is one of the extremely rare times Wayne Manor is given a specific address, 224 Park Drive.

Batman puts the disc in the belt and, wouldn’t you know it, loses the belt on the very next adventure.

A young boy finds it, but not the hidden disc.  He replaces the useful stuff with twigs and rocks, and then loses it as well.  It passes to a beggar and a rich man, before Batman finally gets on its track.  But so do some hoods who have learned it’s secret as well! 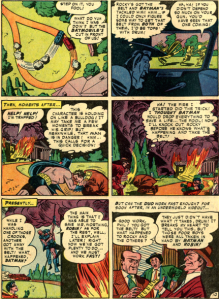 Batman tricks them with a second belt, and his identity is saved.

Not bad for a story about a belt.

Detective 184 – The Firefly debuts, and an earthquake machine