Detective 541 – Batman chases the Penguin to the north pole, and Green Arrow gets trapped by the Death Dealer

It’s yet another second half by Moench and Colan in Detective 541 (Aug. 84), as Batman pursues the Penguin, who has stolen plans for an advance warning system in the arctic (early bird), and plans to sell them to the Russians. 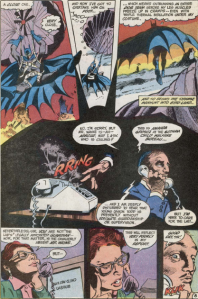 Batman’s chase after the Penguin has negative repercussions he is unaware of at the time.  The child welfare agency tries to call Bruce Wayne that night, and even though Alfred explains that he is taking care of Jason, the powers that be are not impressed. 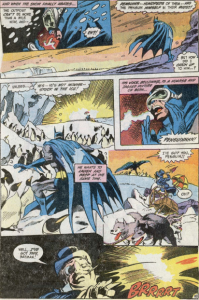 I do like Colan’s rendition of the Penguin.  And you gotta like any story in which he uses real penguins to delay Batman.

In the end, this story has more deception than one would think possible.  The Penguin had fake plans to sell, he had no intention of betraying his country.  But the”real” plans the Penguin stole were fakes as well, disinformation leaked by the government. 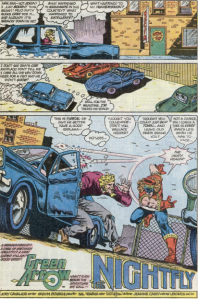 Green Arrow begins a 2-part story pitting him against a hit man with a card fetish, the Death Dealer, in this story by Joey Cavalieri and Shawn McManus. 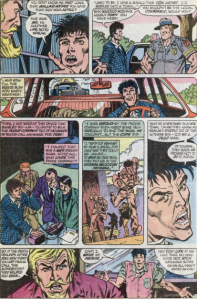 The Death Dealer is hunting down a man in the witness protection program, currently working as a radio dj, and not overly concerned about hiding his real identity.  Cause that’s why they spent millions to give you a new id.  So you could not care. 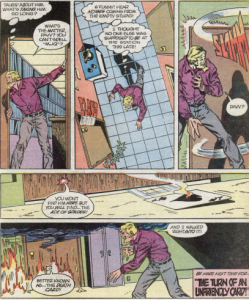 Oliver Queen goes to check on the dj at the radio station, and discovers that the Dealer has locked them both in, and set fire to the place.

Detective 540 – the Scarecrow plays with Robin

Detective 542 – Jason gets taken, and Green Arrow cons a killer