Detective 562 – Batman and Catwoman vs the Film Freak, and the secret of Steelclaw 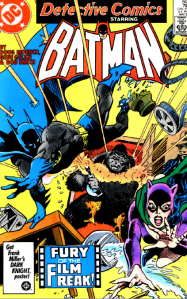 It’s the middle chapter of the three-part introduction of the Film Freak in Detective 562 (May 1986).

Moench and Colan pick up the story from it’s Batman cliffhanger, as Film Freak approached Julia Pennyworth, taking a shower, to re-enact Psycho.  A handy bottle of shampoo and some quick thinking get Julia to safety.

Batman and Catwoman do some digging into the past of actor Burt Weston, and determine that his death was a hoax.

As Film Freak, Weston kills another of his enemies.  The gorilla suit is less than King Kong scary, though. 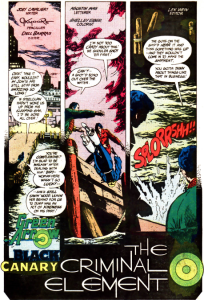 A very impressive outing for Black Canary, and some excellent art by Moore on Joey Cavalieri’s story in this issue.

After being bound and thrown into the water, Canary manages to get free and take down the men who tried to kill her.

Green Arrow seeks out the mayor, to complain about Champion and insist that action be taken against him. Oliver is not pleased by the mayor’s seeming lack of concern. 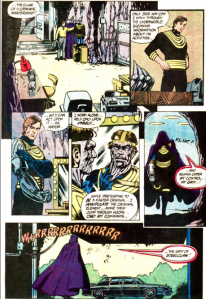 But the mayor has much bigger fish to fry, as we discover that he is really Steelclaw, using the knowledge and power he gains from that position to further his control as mayor.

Detective 563 – Two-Face is lonely, and Green Arrow sets up Champion