Adventure 445 – Aquaman gets a new Aquacave, and the Creeper begins

Adventure 445 (June 1976) has a largely forgettable tale by Paul Levitz and David Michelinie, though the Jim Aparo art is, as always, excellent. 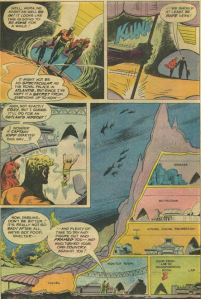 The Aqua-Family move into a spiffy new four story Aquacave, which gets a cutaway diagram.  As it turns out, little of this cave will actually be shown or used in the coming stories.

Aquaman fights a scary monster, at the behest of some underwater religious freaks who kidnap Mera.  But really the only interesting moments in this story have Topo sneaking up on the oblivious Aquababy, which continues next issue.

The Creeper begins a three-part back-up story in this issue, written by Marty Pasko, with art by Ric Estrada and Joe Staton.  The Creeper had last appeared in a team-up with Wildcat in Super-Team Family, and his last solo outing was in an issue of First Issue Special.

The story has Jack Ryder interview a physical therapist whose patients have been dying mysteriously, then coming to her aid as the Creeper, when she gets attacked by a strange robotic figure.

Not a bad beginning, but it feels pretty generic. It doesn’t really capture Ryder’s abrasiveness nor the Creeper’s manic side.

Aquaman’s long run in Adventure comes to a close with issue 284 (May 1961), and it’s a shame that the art is not by Ramona Fradon.  Jim Mooney’s work suited Supergirl well, but here it pales in comparison to what has come before.

The story is pretty basic as well.  Professor Shark leads a crime spree on the ocean, and has developed a number of devices to make things complicated for Aquaman, but of course in the end he is defeated.

The best thing in the tale is the submarine disguised as a whale.

While the end of Congorilla’s series sent him into almost-limbo, for Aquaman it was no great loss.  He was appearing in both World’s Finest Comics and Detective Comics at this time, and as the end of the story notes, about to launch into a try-out run in Showcase that would spin him into his own book.

Aquaman would return to the pages of Adventure in the 70s, and then again in the 80s. 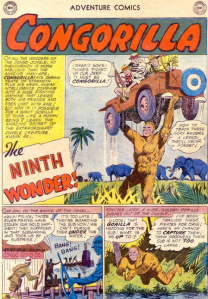 The Congorilla series had begin life as Congo Bill, the story of a white explorer and hunter in Africa, in More Fun Comics.  It moved to Action Comics, where it had a long run.  He gained a sidekick in Janu, a jungle boy, and eventually acquired a magic ring that allowed him to change bodies with a Golden Gorilla.

After losing his spot in Action Comics to Supergirl, his series moved over to Adventure for a short run.  The best of his days were behind him, and few of the Congorilla stories from Adventure are worth comment.

This story, which pits him against Mau Mau rebels, re-introduces the character to the reader, and happily tows the white colonialist line that the English are the good guys in Kenya, and the blacks the bad ones. 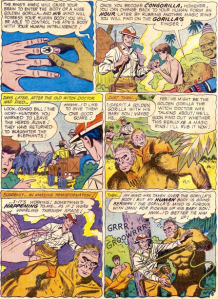 Much more enjoyable is the Aquaman story, in which he becomes convinced that Aqualad is out to kill and replace him.

Aqualad’s actions are mysterious to say the least, and it’s not as unreasonable an assumption as it sounds.  Of course, it proves to be a big misunderstanding, Aqualad was gathering items to furnish the earliest version of the Aquacave, where they live, as a birthday surprise for Aquaman.