Chameleon Boy is revealed as the winner of the contest in the previous issue, and spends almost all of Adventure 376 (Jan 69) in solo action in another dimension, even getting a romantic storyline, thanks to Jim Shooter.

The story reveals how Chameleon Boy beat Psyche, and adopted the identity of Bouncing Boy, having Proty II impersonate him to complete the cover-up.

Although he has won the championship, and was teleported to the dimension to face off against Kodar, the King gets upset that his daughter, Princess Elwinda, has fallen for the Durlan, and wants to stop him from fighting to save the kingdom.  Pretty racist king there, willing to lose everything just to keep his daughter from marrying a man he doesn’t like.

But though he defeats Kodar, the Legionnaires track him down just as he is undergoing a bizarre wedding ritual (derived from the native ritual in the wedding between John Smith and Pocahontas, in fact), and teleport him back to “safety,” which also seals the gap between the worlds.

Chameleon is less than pleased to be home.  Princess Elwinda never appears again, but he will meet a woman who resembles her in a story in Action Comics.

Adventure 375 – The Legion vs The Wanderers

The Wanderers are introduced in Adventure 375 (Dec 68), another team of super powered heroes in the 30th century, but they quickly get mind-controlled and the Legion must battle them rather than work with them.  Jim Shooter crafts a decent tale that is sadly undermined by Win Mortimer’s art. 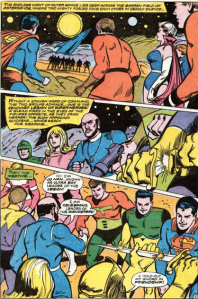 The two teams meet in peace at first.  But just as the Wanderers get mind-controlled the Legion receive a mysterious message challenging their “mightiest member” to combat.  Quantum Queen, another of the dead heroes shown in the Adult Legion story, is part of the Wanderers.

Ultra Boy merges the two situations, arranging a contest between the Legionnaires interested in winning the right to stand for the team, by taking down the Wanderers.  There is even a nifty little chart to show the breakdown.  Curiously, Celebrand is at the highest point of the competition, despite having no powers. 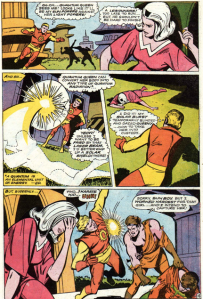 The Legion progress through the chart, with some surprising winners.  The Wanderers, on the other hand, do little to impress, not even Quantum Queen.  Of all the battles, Karate Kid does the most impressive job, defeating Ultra Boy and Sun Boy despite having no powers.  Chemical King and Timber Wolf both take part, but neither fares very well.

In the end, it appears Bouncing Boy triumphs, but the way the scene is drawn makes it clear the reader is missing something – and indeed, as we discover next issue, as the story continues, it is really Chameleon Boy who won, but disguised himself as Bouncing Boy to keep an edge, and is teleported away.

The story concludes next issue.  The Wanderers make occasional cameos over the years, eventually getting a dismal, sort-lived series in the 80s.

Adventure 372 (Sept 68) sees Timber Wolf’s long-awaited entry into the Legion, as well as Legion Academy member Chemical King, but Jim Shooter and Curt Swan also provide the earliest chronological appearance of the Legion of Super-Villains in this tale.

After being expelled last issue, Colossal Boy gets recruited by Tarik the Mute for his new Legion of Super-Villains.  He joins expelled member Nemesis Kid, as well as Legion rejects Radiation Roy, Ron Karr and Spider Girl.

Meanwhile, Bouncing Boy gets around to showing Ultra Boy the “life gem” he discovered at Gim’s place.  Shame he didn’t bother to do that when he showed him the missing training manuals.  Realizing the actual situation, Ultra Boy has Superboy, Chameleon Boy, and Academy members Timber Wolf and Chemical King adopt disguises to infiltrate the LSV.

As well as the villains mentioned before, they also discover Lightning Lad’s missing brother Mekt, in his earliest story.

Colossal Boy figures out who the Legionnaires are, and exposes them, rather than risk his parents’ lives.  Neither Timber Wolf nor Chemical King show particular prowess in their first outing.

Chameleon Boy pulls off a really impressive transformation, impersonating Superboy, and then pretending to turn to glass, and then into shards of broken glass.  That last change really should be beyond the range of his powers, being dozens of separate objects, but there would be a couple of stories in which he adopted multiple forms like that.

The Legion raid the LSV, and Colossal Boy is restores to Legion membership, while Timber Wolf and Chemical King, neither of whom did anything particular in this story, become members as well.

This story is also the final Curt Swan Legion tale in Adventure.

The concluding half of Jim Shooter’s 2-part Mantis Morlo story sees the Legionnaires on Daxam and Naltor, but the mediocre art prevents Adventure 363 (Dec 67) from even equalling the previous issue.

Mon-El’s team finds Daxam in ruins, its cities destroyed by chemical storms, which means the artist doesn’t have to bother drawing them.  I chose the above page because it has the only Daxamite building in the issue.  Morlo’s base is underwater, and the Legionnaires chase him there, but he escapes.

Meanwhile on Naltor, Morlo has poisoned the food supply, causing bad dreams on this planet of psychics, which is causing mass panic.  Again, little is shown of Dream Girl’s homeworld, but at least we get some idea of how this unusual world works – or doesn’t, in this case.  Ultra Boy has an impressive scene, using his penetra-vision to view the planet layer by layer until he finds Morlo’s base deep underground.

But neither Morlo is the real one, nor was he actually on Orando.  They are all chemoid duplicates of himself.  Chameleon Boy figures that out, as his antenna react to the Morlo he encounters on Naltor.  We learn that Durlan antennae “read” any new form they encounter, and since he read Morlo twice, one must be a fake.  He impersonates a chemoid in order to learn the villain’s plan – to blow up the Earth – then alters his cannon’s aim so he fires at a fake Earth built by Superboy and Mon-El.

Mantis Morlo returns in the late 70s, in a mildly better story.

Adventure 343 – The Legion vs the Luck Lords

In Adventure 343 (April 66) Edmond Hamilton introduces the Luck Lords, and the possibility that all the bad things that have befallen the Legion recently have a supernatural origin.  Curt Swan does his usual excellent work on this story, and I particularly like the bizarre tower he created for the Luck Lords.

The Legionnaires discuss the ideas of bad luck on various worlds, in various cultures.  Chameleon Boy gets Proty II to turn into a jinx stone, which Durlans consider unlucky.  As a joke, the other Legionnaires touch it (as do the Super-Pets), and then bad luck starts to befall them.

Suspicion begins to run rife within the team.  Lightning Lad, Star Boy, Bouncing Boy and Duo Damsel all realize they did something “unlucky” before their tragedies struck them.

The Legion head to Thaun, the most superstitious planet in the galaxy, and the home of the legendary Luck Lords.

The resolution is a bit of a let-down, as the Luck Lords turn out to be nothing more than aliens with a long range hypnotic ray, the cause the of the Legion’s recent problems, but not the events from earlier issue.  The Super-Pets, who are immune to the ray, are called on to defeat them, which is fun.

The Luck Lords return many years down the road, but in all further stories they truly are supernatural beings.  So these ones are just straight out frauds.

Adventure 333 – The Legion goes to war – against itself 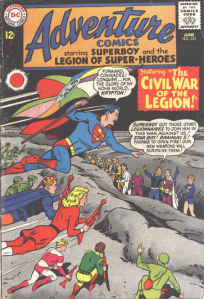 The Legion goes to war with itself in Adventure 333 (June 1965), written by Jerry Siegel, an event so abrupt that it must reveal some long-simmering tension within the team.

It all begins innocently enough, with Phantom Girl helping out at an archaeological dig, where a plaque is discovered that refers to a war between Krypton and Earth.  Saturn Girl and Superboy travel back in time to ancient Krypton, along with Lightning Lad, Colossal Boy and Element Lad, while Brainiac 5 takes Phantom Girl, Light Lass, Star Boy and Chameleon Boy back in time on Earth. 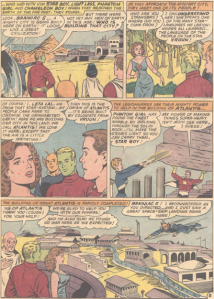 Superboy discovers a group of his fellow Kryptonians are leaving the planet to set up a colony on Earth, and his group of Legionnaires accompany them.  Meanwhile, Brainiac 5’s group discovers some alien settlers who are building the city of Atlantis.

When the two colonizing parties meet, Saturn Girl and Brainiac 5 immediately start a furious argument, which quickly escalates into war.  Just to be clear on this, the war is NOT started by the Kryptonians or Atlanteans, but by the Legionnaires themselves!  Superboy, who ought to be on the Kryptonian side completely, is instead trying to make time with Atlantean Leta Lal, fatally attracted by her initials.

The war is, at least, a sort of peaceful one.  Neither side actually wants to kill the other, although the Atlantean weapons do accidentally cause some Kryptonian deaths.

In the end, the environment determines the winner, as the Atlanteans cannot exist with the xenon in Earth’s air.  Brainiac 5 artificially “evolves” them into mer-people, and Star Boy sinks their city below the water.  The Kryptonians fare no better in the long run, being killed off by the giant lizards they brought from their home planet.

Although all seems well with the Legionnaires, and Saturn Girl and Brainiac 5, at the end of the story, his resentment over this may be the cause of his behaviour during the Computo story a few months down the road.

Adventure 326 – The Legion’s Battle of the Sexes

This is one of those uncomfortable sexist stories that were far from uncommon in comics from the 1960s.  While it does show the female Legionnaires as capable of besting their male counterparts, the fact that they are being controlled by the leader of the planet Femnaz prevents this from being as fun as it might.  Like seriously, why shorten it?  Jerry Siegel was pretty obviously thinking Feminazi.

Saturn Girl sends most of the male members of the team on a fake mission, and then the rest each pick one of the remaining boys to take down.  Triplicate Girl takes on three boys!  Tramp.

Supergirl gets a role in this story, though that’s nothing to really crow about.  Her victim of choice is Chameleon Boy, and in defeating him she invents Cancellite, which freezes Durlans in the form they are in, preventing them from shape-shifting.  Cancellite will appear again over the years.

Saturn Girl’s target is Superboy, instead of the more obvious Lightning Lad, but as she is leader and he is the star member, that is easily explained.  More curious is the scene with Phantom Girl and Star boy making out before she tricks him into plunging into the ground.  Ultra Boy was one of the ones sent on a mission, but Star Boy is always shown enamoured of Dream Girl.

Much later, this story would be referenced as a fling Phantom Girl had before settling down with Ultra Boy. 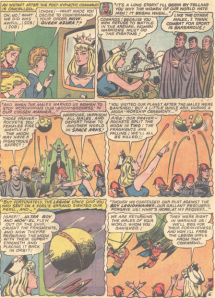 The conclusion is even worse than the story, if that’s possible.  Queen Azura releases the women from her mind control after the women of her planet accidentally blow up their own moon.  Split it in half, actually, in some really poorly drawn panels.  Because Mon-El and Ultra Boy save them from dying as a result of their stupidity, she realizes how important men are.

Let’s just move on to the next story, shall we?