Batman attempts to prove who he is, pulling out the diamond-studded Batman badge he was given earlier in the year, but as he had to pawn the diamonds, the police still refuse to believe he is who he claims to be.  Or else the policeman is still bitter that so much of their budget went to purchasing the badge.

Then the story jumps back, and we learn of an embezzling treasurer at Wayne Motors, who has skipped town.  Covering the losses has wiped out Bruce Wayne – which would seem to imply that his wealth is nowhere near the level it would be in stories from the 70s onward.

Dick and Alfred each set out to earn some extra money, while Bruce sits around at home, feeling sorry for himself.

There is a whole element of tracking down a gang of thieves.  Curiously, the plot is not about tracking down the embezzler.  The thieves are secondary to the story, though.  It’s really about seeing Batman operate without money.

In the end, the treasurer is caught, no thanks to Batman, and Wayne’s fortunes restored.

Detective 95 – Batman vs the Blaze, and the Boy Commandos in a haunted castle

Another generic Batman and Robin cover on Detective 95 (Jan. 45), but considering the villain in this issue, it’s no loss.

The Blaze is introduced in this Mort Weisinger story, and thanks to Dick Sprang’s art, he looks interesting.  But despite the picture, there is nothing fiery or candle-ish about him.  He has a bomb. 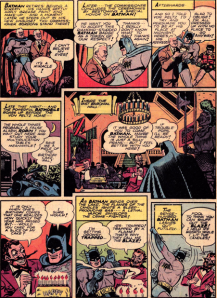 He frees a group of men from a train taking them to prison, and leads them in a massive revenge plan against Batman.  Which is kind of odd, considering the Blaze had never fought Batman before.

Also, please note the central top panel.  Batman receives a diamond-studded Batman badge from Commissioner Gordon.  I’m sure the police were all very happy to spend their budget on this.  The badge does return in a couple of stories. 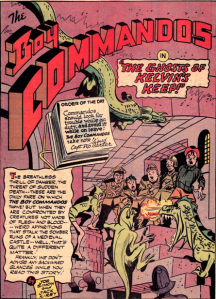 Jack Kirby returns to pencil this instalment of the Boy Commandos.  All the stories had the “Simon and Kirby” logo on them, but many were drawn by other artists, and are of varying quality at duplicating the look.

This is a really fun little story, that has the boys in a haunted castle.  One is expecting Nazis to show up at some point, but the story goes off in a different direction for a change. 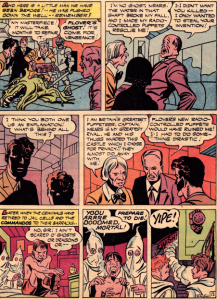 The castle was the home and workshop of a reclusive puppeteer, and it was being invaded by a rival puppeteer.  Oh, those deadly puppeteer battles.