Detective 184 – The Firefly debuts, and an earthquake machine

Garfield Lynns debuts in Detective 184 (June 1952), a decent villain with a weak name and a terrible costume, as the Firefly.

The story introduces us to Lynns, a special effects expert with a taste for the destructive and an overweening arrogance.  He causes a huge fire in a theatre, and winds up on the run.

His rationale for choosing the name Firefly is pretty lame.  Lame enough to make you wish for almost anything else, and the costume, designed by Dick Sprang, is no big plus. 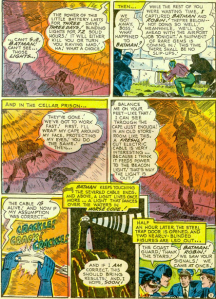 That’s a shame as his “powers” are fairly impressive, with an extensive control of light effects.  Aside from the explosion at the beginning, there is no element of Lynns being an arsonist.

It takes a long time for this character to return against Batman, and his next outing, against the Creeper, took until the mid-70s to happen.

A man with a machine that can create meteorological events is the focus of this instalment of Impossible But True, with art by Ruben Moreira.  He seeks vengeance on a town for not believing in him, and is more than happy to demonstrate the machine’s abilities to Roy Raymond.

Raymond keeps giving simple scientific explanations for the machine’s effects, until finally the man declares he will cause an earthquake. 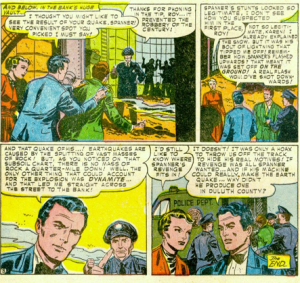 The earthquake turns out to be an underground explosion, from associates of the man blowing a bank vault.  It was all an elaborate piece of misdirection.  But Roy Raymond was too smart for them!