Detective 274 – Batman and the crazy old hermit, and Martian Manhunter vs Human Flame

Another dreadful cover for a not so awful Batman and Robin tale in Detective 274 (Dec. 59) by Sheldon Moldoff.

Batman and Robin trail four mobsters to a deserted island where they hide their money, and all five are confronted by a crazy old hermit, who prophecies their dooms. 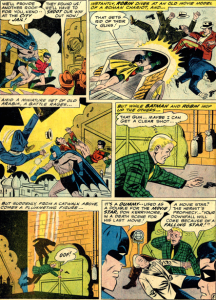 And then, as one might expect, the various crime bosses meet their downfalls in ways that fit the prophecy.

Batman figures out it’s all an elaborate cover, that the final crime boss and the hermit were working together.  The boss was taking out his rivals, but in such a way that suspicion would not fall on him.

J’onn goes up against the Human Flame in this issue, an arsonist with a suit that sprays fire out of his nipples.

The Martian Manhunter displays yet another amazing power in this issue, creating sonic waves by snapping his fingers.  This would not be a normal part of his repertoire. 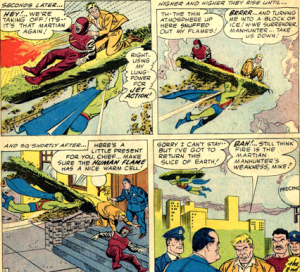 J’onn avoids the fire by burrowing undeground and lifting the Human Flame and his associate, and the very ground they are on, hauling them all off to prison.

The Human Fame stayed in prison for a very long time, emerging just before Final Crisis. 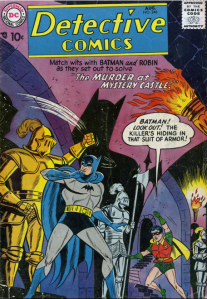 After years of increasingly silly tales, in Detective 246 (Aug. 57) Bill Finger and Sheldon Moldoff put Batman and Robin into a serious murder mystery, set in a castle just outside Gotham. 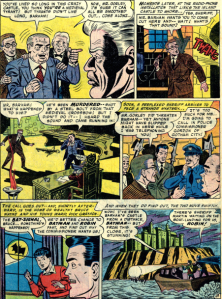 Wealthy gun dealer James Barham is murdered in his castle, and the four guests are the only possible suspects – relatives and business associates who all have reasons to kill him.

Part of the mystery is figuring out even how the murder was committed.  A crossbow was used as the weapon, but no one was in the room when it was fired. 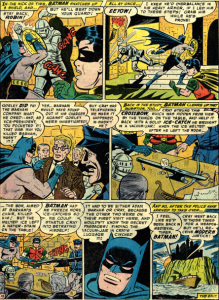 Batman puts the pieces together, and realizes the importance of the water stain on the table with the crossbow – a lump of ice was used to set it off.  This is not the greatest Batman story ever told, not even close, but it’s still miles above most of what has been printed in the preceding few years. 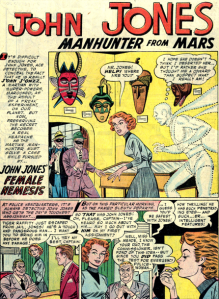 John Jones gets a female partner in this Jack Miller story, Diane Meade, a rookie policewoman. 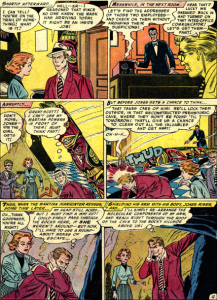 Her primary function in the story is to make life difficult for J’onn, who is not able to use his many powers on the case, simply because she is there and would see what he was doing.  Much better than having a comet take away his powers for a story.

Diane was likely intended as a one-shot character, but her usefulness, as well as the lack of supporting cast in this strip, were probably responsible for her return a couple years down the road.

Batman gets some new toys in Detective 238 (Oct. 56), in a story with art by Sheldon Moldoff. 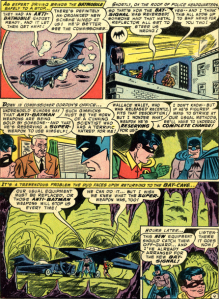 After a clever felon invents devices that neutralize the advantages of the Batmbole, Batplace and Bat Signal, Batman and Robin realize they need to build some new equipment to take the bad guys down.

The new Batmobile is a purple tank, and the Batplane is replaced by a weird purple machine called an “anodyne.” which looks like a flying saucer. 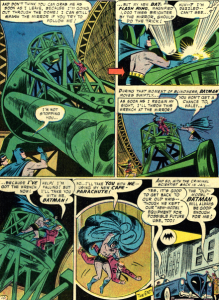 The new Bat Signal utilizes a telescope.  They use these things to defeat the bad guys, but then return to their tried and true weaponry at the end of the story.  Although the conclusion holds out the possibility that these devices will return, none of them ever did.

J’onn fights crime on two worlds in this story, which sees him in Martian form for the bulk of the tale.

Thanks to solar flares affecting radio waves, J’onn is able to communicate with his parents back on Mars.  They tell him of thieves using the canals for their thefts, and as John Jones, he happens to be investigating a similar case on Earth.

J’onn realizes that in both cases the thieves are attaching themselves to things (fish or ships) traversing the canals, and while he stops the bad guys on Earth, his father passes on the info and the Martian thieves are caught as well.

This story also sets up a possibility of a rescue mission for J’onn, as now his parents, and other on Mars, know where he is and what has happened to him. 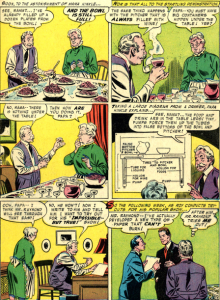 The story follows an old man convincing his wife that he can fool Roy Raymond with a self-replenishing table he has invented.

Despite Karen’s misgivings, Roy puts the man on his show, but not for the table.  Roy pulls a surprise happy ending out of the story, revealing that the amazing thing is the intricate needlework on the tablecloth itself.  Nice.

Detective 227 (Jan. 56) has another of the stories that explores an element of Batman’s arsenal.  In this case, his make-up and disguises.  Batman winds up teaching a class at a beauty school in his techniques, and one of the students is using the opportunity to study Batman’s face, to attempt to reconstruct it without the mask.

Aging actor Barret Kean is introduced as the man who taught Batman his cosmetic skills, and he is the one opening the school.

We get a few different short tales of how Batman and Robin used make-up to capture crooks, and then it’s time for the big finale with the guy scoping Batman’s face. 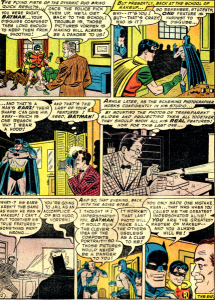 Barret Kean takes Batman’s place for the last class, revealing his ears, but causing the bad guy to create an impossible composite.  I’m not sure who wrote this, but the art is Sheldon Moldoff. 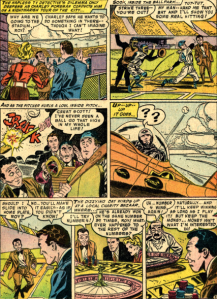 He flies around in a car, makes the fourth floor of a building disappear, controls the roulette wheel at a casino, and other things that Roy simply cannot explain.

At the end, Roy convinces the man that the whole country is paying tribute to him, and he leaves, back to the 4th Dimension.  He really was an extra-terrestrial being with astounding powers.  But Roy had fooled him with American Fourth of July celebrations.  Karen seems to have been under the influence of something, as she needs the holiday explained to her.

Jack Miller also scripts the Martian Manhunter tale in this one. J’onn is put on the case of a killer,and uses his mind reading abilities to “view” the murder, and then pretend to have some eye witness details.

The man thinks nothing of having John Jones run down by a car, which of course J’onn survives. 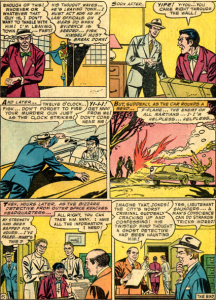 He spends the rest of the story tailing the man, using his intangibility to “haunt” him and survive further murder attempts, until the killer finally turns himself in.  Quite a dark story.

Detective 222 – The Great Batman Swindle, and Roy Raymond meets a man who slept for 200 years

Wealthy and athletic Ned Judson receives an invitation to join the secret Brotherhood of the Batman.  They explain to him that Batman is really a group of people, with a variety of specialized skills, working together.  Judson has been chosen as the newest member, and is thrilled with the prospect.

It’s a clever scam, and they go all out with it, setting up phony crimes and having him stop them in Batman uniform.  Meanwhile they charge him for the various accessories, and soak him for all he’s worth.  Batman gets wind of this, when they see a fake crime, and he introduces himself to Judson as Batman number one, the one who gets to work with Robin, and they begin super-secret training. 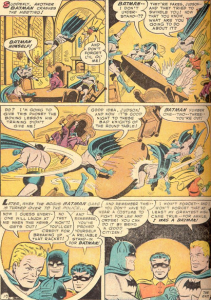 So unwittingly Judson helps Batman bring down the mob that had conned him, and Batman makes Judson not feel like a complete ass for falling for it.  Kudos all around.

This story was retold as a Black Orchid tale in the mid-70s. 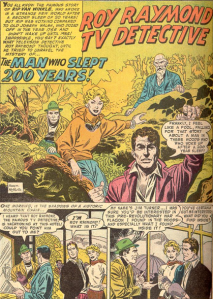 The man tells a story of meeting little men and then falling asleep, waking up in the present.  It’s a decent story, but the main reason I included it is Roy’s method of catching the con artist. 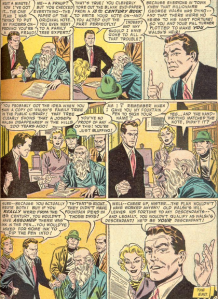 Roy offers the man a ballpoint pen, and he takes it and writes with it.  But no one pre-20th century would guess there was ink inside a pen already.

Roy used this exact same trick on a man claiming to be Benjamin Franklin in an issue a year or so earlier, and I know he uses it at least once more.  It’s his go-to test.