Detective 525 – round 2 for Batman and Croc, and Green Arrow smokes out Machiavelli 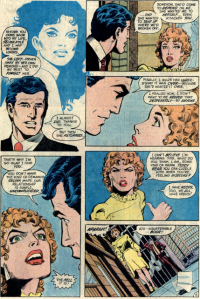 Bruce and Vicki find time in their schedules for a date, and all goes well until Bruce tells Vicki how great it is that she is not demanding or dependent, like Selina was, and how he can’t stop thinking about her.  Vicki acts about as well as any woman would in that situation, barking and Bruce and storming off.

Robin is back at the circus with the Todds, where he has the brilliant notion to enlist Joseph and Trina Todd in Batman’s battle with Croc.  Because two circus trapeze artists are likely to make a big difference.  Jason Todd is totally cool with it as well. Perhaps someone told him this was part of his origin story. 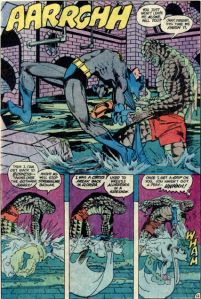 Batman tracks Croc down into the sewers, where they fight.  Croc beats Batman for the second time.

This storyline has been moving back and forth between Batman and Detective, but comes to a conclusion in the next issue of this book.

Cavalieri, Novick and Randall conclude Green Arrow’s battle against Machiavelli in this story.

It’s an abrupt and odd finale.  As Machiavelli continues to convince the people of the wonders of openly being selfish and criminal, a fire breaks out in the building.

Now, in most cases that leads people into a panic, trampling each other to get out.  But Green Arrow tells everyone to be calm and work together, and they do.  And in doing so, realize the benefits of community, and turn against Machiavelli.

Of, and there was no fire, just a smoke arrow.

I really wish they had brought this character back. There seems to have been a lot more they could have done with him, particularly considering how political Green Arrow is.

Detective 524 – Batman vs the Squid, and Green Arrow vs Machiavelli 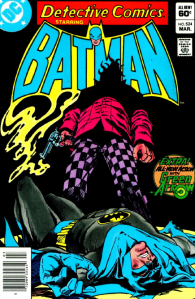 Croc’s rise continues with Detective 524 (March 1983)  by Gerry Conway, with art by Newton and Giordano.

Croc is still working for the Squid when this story begins.  And at the opening of the story, the Squid looks to be in a good position, having thrown Batman into a tank of his namesakes.

But Croc and the Squid do not see eye to eye.  Croc’s hat comes off, and this is the first time we see his face.  Croc walks out, and the Squid vows vengeance on him.

Meanwhile, back at Wayne Manor, a party is in progress, although the guests (expecially Vicki Vale) are still waiting for Bruce.  Dick Grayson brings along the Todd family, circus performers he met recently in the pages of Batman.  Joseph and Trina Todd are the parents of young Jason, and the whole family are aerialists, so it’s easy to see why Dick has bonded with them.  Barbara Gordon is there as well, along with her father, recently re-instated, so he’s back to being Commissioner Gordon. 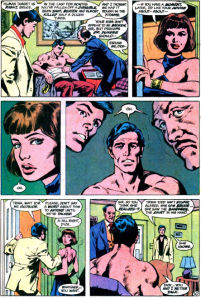 Batman escapes from the squid tank, and makes it back to the mansion.  Alfred is tending his wounds, but no one thinks to close the door or separate themselves from the rest of the party, so Trina Todd just comes walking right into the room, seeing the Batman costume and everything.

Fixed up, Batman resumes his attack on the Squid.

But it’s Croc who wins, shooting the Squid with a sniper rifle, just as the Squid was about to shoot Batman.

Green Arrow squares off against the Executrix in this story by Cavalieri, Novick and Randall.

Machiavelli continues to promote his unusual brand of libertarianism, but finds people willing to listen, and begins to make a splash in Star City politics. 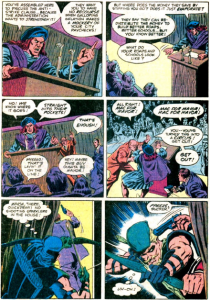 He is on the verge of being swept into office as mayor by the time Green Arrow defeats Executrix and makes it back to him.

Detective 523 (Feb. 83) sees Batman pitted against Solomon Grundy, in a story by Gerry Conway, with art by Gene Colan and Tony deZuniga.

The story is part of the rise of Croc, who makes a shadowy debut in this tale.  We see his green hand in one panel, above, but otherwise he is in a trenchcoat and large hat.  His gang has adopted Grundy, but Croc feels that this will not bode well for them, and takes off.

The story makes a point of tying this Grundy to the ones created in DC Comics Presents, and it shows him as childlike to the extreme, when not angered.

That doesn’t make this Grundy any less deadly when angered.  As Croc thought, his destructive nature brings Batman down on the entire gang.

Irv Novick and Ron Randall take over the art on Joey Cavalieri’s Green Arrow story in this issue. It opens with Arrow and Hi Tek (we learn that his first name is really Rich), as the boy becomes Oliver’s computer brain.

Green Arrow goes into action when a demonstration turns violent, but follows the troublemakers, and finds them working with the big wigs, supposedly on the other side.

And indeed, the riot was part of a plan by the elites of Star City to extend their control, both legal and illegal. Machiavelli is introduced.  I do like the idea for this character, a brilliant and ruthless manipulator, but its a shame they had him dress Renaissance. 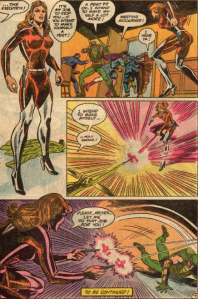 Certainly Machiavelli has no trouble with hiring people who are not in historical garb, as his muscle is a lycra-clad Executrix.