Nelson Strong hears the tale of a callous and arrogant photographer who goes to Africa in search of a secret tribal ceremony, in this Adventurer’s Club story by John Albano and Jim Aparo. 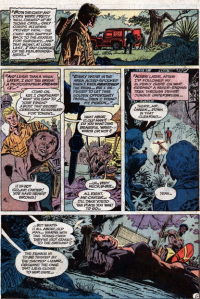 His trespass first costs the life of his guide, and the story has a dark ending.  Again, this would fit completely into House of Mystery, or any of the rest of the DC horror line. 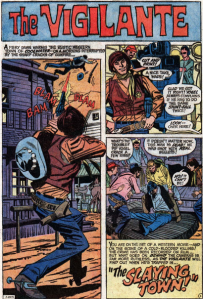 Vigilante deals with a murder on a western film set in his final outing in Adventure Comics, a story by Cary Bates with art by Mike Sekowsky and Dick Giordano.

An actor’s gun is loaded with real bullets, and though he claims innocence no one except Vigilante believes him.

The brief tale winds up being about mob vengeance and a phony production company that is a front for diamond smuggling, but is actually pretty good for all that.

Vigilante’s next series comes about four years down the road, in World’s Finest Comics, though the Earth-3 version of the character gets a story in Adventure in another year or so. 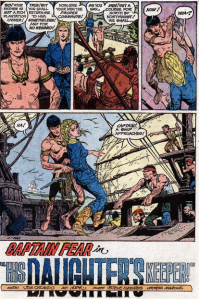 The woman Captain Fear rescued in the previous issue, Denise, turns on him when their ship is attacked by another.  The enemy ship is captained by her father – or so she claims at first, and Fero is put into chains in this Robert Kanigher/Alex Nino story. 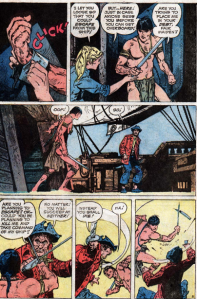 She tells Fero that does not want to see him imprisoned and killed by her father, and frees him, but this is merely a set-up. 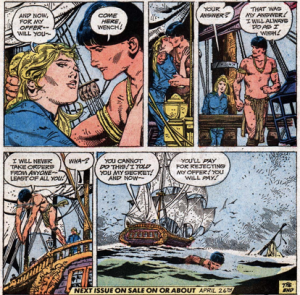 He defeats the pirate, and Denise reveals that he was not her father, rather, she was his unwilling mistress.  She takes command of the ship, and offers to make Fero her second in command, but he spurns her once again.

The Adventurer`s Club begins in Adventure 426 (March 1973), which is basically just a framing sequence for unconnected stories.

Nelson Strong is the host of the strip, and though he is meant to look manly and authoritative, his introduction of the concept makes him look sort of crazy to me.

This first tale, written by John Albano and drawn by Jim Aparo, would not have been out of place in any of DC`s horror books from the era.  It tells the story of gangsters haunted by the vision of a woman accidentally killed in a drive-by shooting, whose father was a hypnotist.  The story makes is clear there is nothing actually supernatural happening, beyond the hypnotic powers of the vengeful father. 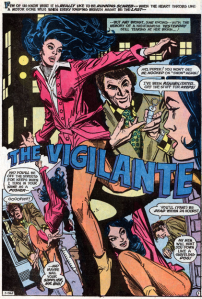 Vigilante comes to the aid of a young woman who kicked a cocaine addiction, and is now being hunted by her former dealer and ex-boyfriend, who fear (correctly) that she will turn them in to the police. 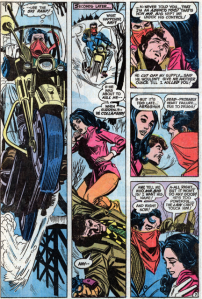 A decent tale, written by Cary Bates, with art by Mike Sekowsky and Dick Giordano, that makes the most of its ski resort setting, not the normal locale for a motorcyle-riding hero.

The Captain Fear story in this issue must take place quite a while after the last one, though no time frame is given, but he is now in Indochina, where he rescues a white girl from some nasty people who want to sacrifice her.

She begs him to return her to her wealthy father, a plantation owner, and also tries to make some moves on Fero, who rebuffs her coldly. 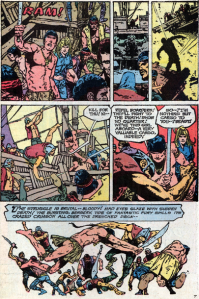 He does manage to get her aboard his ship, fighting off a rival crew, but she turns the tables on him, pulling out a gun.  There is more to her than it seems, but what…?

Robert Kanigher and Alex Nino were at the helm of this tale.

Aliens plot to conquer the world using mind-controlling sunglasses in Adventure 423 (Sept 72), a story by E Nelson Bridwell and Steve Skeates, with art by Mike Sekowsky and Bob Oskner.

Linda is out shopping when a pushy saleswoman shoves a pair of sunglasses on her, and she discovers she cannot remove them.  The glasses also force her, or anyone wearing them, to follow the commands of the aliens who created them.

She is ordered to Metropolis, where she switches the glasses with Clark Kent’s usual ones, rendering him under the aliens control as well. 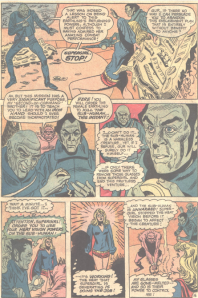 The two aliens brothers behind this are not working together well, and one decides to betray the other, and has Supergirl use her heat vision, which results in the destruction of the glasses, freeing her mind. 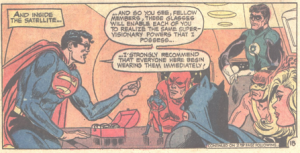 Superman brings the glasses to the Justice League, but Supergirl intervenes, much like the scene on the cover, and gets Green Lantern to destroy the glasses Superman is wearing.

A fairly silly story.  She still has her problems with her powers vanishing at times in this tale, although that has been used less frequently in recent months, and this would be the last story to reference that. 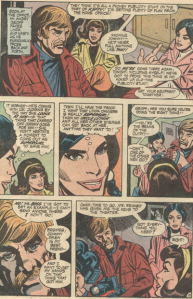 Linda escapes from the hospital and rejoins her newscrew, in time to investigate a haunted theatre.  Johnny Drew, Linda’s cameraman and new boyfriend, gets captures by a mysterious monster, as does Nasty when they try to capture him.

Supergirl tracks the creature down, discovering that he is working for Starfire.  Starfire puts Supergirl in a vat of acid when her powers disappear, but of course they return again in time for her to escape and capture Starfire.

The come and go powers fall into this pattern to a sickening degree, always going away in order to put her in peril, then returning to allow her to triumph.

Starfire is thrown in prison, apparently for a very long time, as she never appears again.

Despite never going to classes, at least not that we ever see, Supergirl graduates from Stanhope College in this Mike Sekowsky story in Adventure 406 (May 1971), getting a new job in a new city. 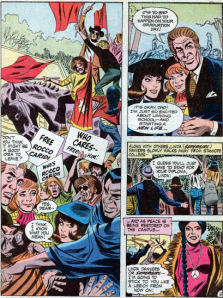 Her adoptive parents, Fred and Edna Danvers, make a rare appearance, showing up for Linda’s graduation, which is marred by a campus riot.  While Robin’s series at this time was all about the turmoil in universities during the Vietnam War, the Supergirl series rarely showed anything of campus life, aside from occasional dances.

Linda heads to Metropolis to see her cousin, with Nasty tagging along behind.  Clark informs her of a job at a television station in San Francisco, and Nasty overhears, heading there as well.

So by the end of the story, Supergirl is now living and working in San Fran, the hub of hippiedom.  Again, this is part of the move to make the Superman family more hip and modern, but aside from the location, the Sueprgirl series would pay no more attention to the world of Haight Ashbury than her college days did to the Vietnam protests.

Her powers continue to come and go, and this issue ends with a cliffhanger. Linda gets injured in a fire, winding up in an ambulance, terrified that her invulnerability will return while she is under medical care.

Derek’s twin brother Rodney shows up in Adventure 405 (April 1971), by Mike Sekowsky, with inks by Dick Giordano.  He goes to Starfire, who blames Supergirl for Derek’s death, and Rodney seeks vengeance against her.

When Supergirl tracks down Starfire, Rodney tries to kill her, and Supergirl briefly believes him to be Derek, back from the dead.  She takes him away, and manages to convince him that Starfire was responsible for his brother’s death.  They devise a plan to capture Starfire, but it backfires when Starfire shows the same compassion for Rodney as she did for his brother, and tries to have him killed.

They escape, of course, and Supergirl messes up Starfire plans to rob a couturier.  Supergirl believes Starfire dead at the end of the story, but the reader sees that she survived.

Continuing the story begun in issue 402, Adventure 404 (March 1971) has Supergirl coping with the loss of her powers, thanks to the manipulations of Starfire, in a story written and drawn by Mike Sekowsky.

Supergirl’s invulnerability and quick healing returned just as she was being shot at the end of last issue, but the effect of Starfire’s pill is that Supergirl’s powers continue to come and go.  She heads to the bottle city of Kandor, and the scientists there create some gear for her to wear that will duplicate her powers, to a degree.

I should mention that at the same time these stories were coming out, Superman also had half his power drained by the “Sand Superman.”  This was an attempt to make the characters more vulnerable, but with both it failed to capture the readers, and within a couple of years they were both back to normal.

Starfire pays off Derek for his work seducing Supergirl, but then has him killed before he can reveal her plans.

Starfire finally reveals her all woman army, and leads them on a crime spree.  Supergirl shows up to stop them, but her powers wane and her weapons don’t work properly, and Starfire is able to take her down in hand to hand combat.

Supergirl does recover, and takes out Starfire’s army, but Starfire herself flees and remains on the loose.