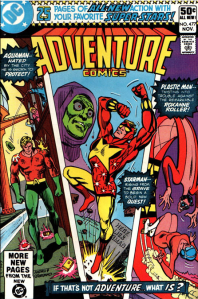 Another split cover on Adventure 477 (Nov 80), and the final one to really feature Starman and Plastic Man. 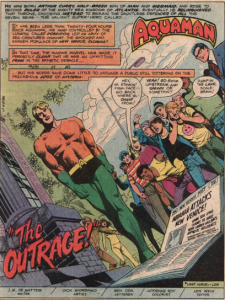 Aquaman leaves New Venice by mutual agreement as this story, by J.M. DeMatteis and Dick Giordano, begins.  The mayor is furious with him for abandoning so many of this plot lines from World’s Finest Comics. 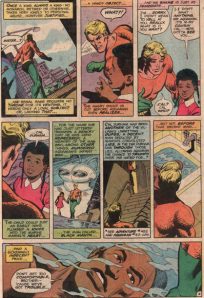 But another long-abandoned character shows up, Cal Durham, formerly one of Black Manta’s men, now forced to live underwater.  His young sister goes to Aquaman for help.  Cal had last appeared in Aquaman’s brief 70’s revival, along with Manta. 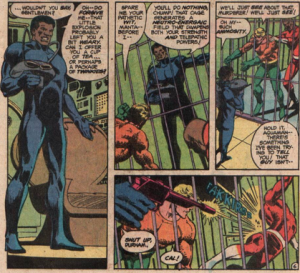 And it’s Black Manta that is the trouble once again, capturing the two after Cal stumbles across Manta’s new base, from which he plans to attack and conquer Atlantis.

On the last page, Mera re-appears.  She had not be taken, so much as phased away, and now back, still all feverish and comatose. 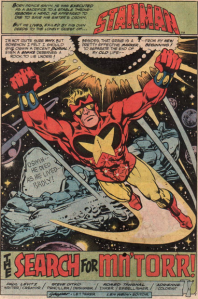 Starman goes in search of Mn’torr in this chapter, by Paul Levitz, Steve Ditko and Romeo Tanghal. 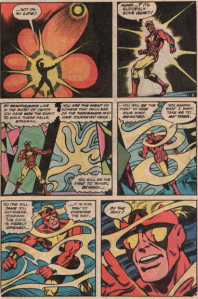 He heads to a trippy temple Mn’torr was connected with, which speaks to him and allows him to essentially teleport to Mn’torr’s homeworld. 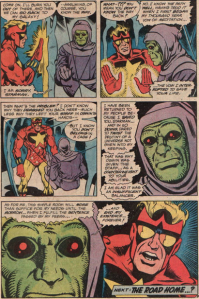 We discover that he broke sacred vows about the balance of the universe when he rescued Prince Gavyn, and that he was not defeated by Oswin, but by his own people, who gave Oswin the staff to balance the power.

Adventure 476 – Aquaman vs Poseidon, and Starman vs Lord Protector Oswin 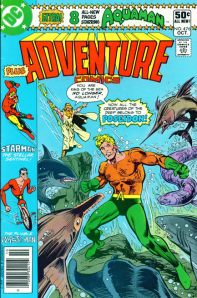 Aquaman hunts for Mera in Adventure 476 (Oct 80), in a story by J.M. DeMatteis and Dick Giordano. 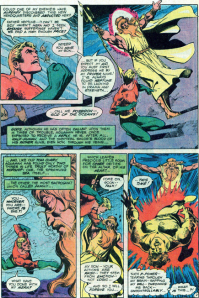 He runs into a powerful man who claims to be the god Poseidon, although it’s fairly clear he is not.  When he explains his past he is clearly an amnesiac survivor of a shipwreck who comes across a mysterious but powerful trident, the source of his powers.

He has nothing to do with Mera’s disappearance either, and there is little significant about this tale, aside from the gorgeous art. 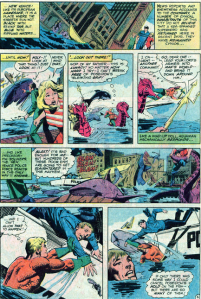 That, and the fact that their battle leads them into the town of New Atlantis, not seen for decades in Adventure, but re-introduced in his World’s Finest run. 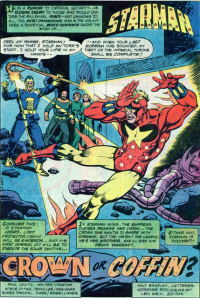 Oswin hold the powerful staff of Mn’torr, and thus the upper hand, as the Starman story opens, by Paul Levitz, Steve Ditko and Romeo Tanghal. 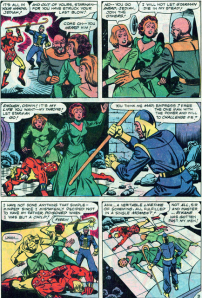 While Starman tries to hold off Oswin, Jediah attempts to get Clryssa and Merria to safety, but they refuse to leave.  Jediah follows the Empress’ orders and departs, hooking up with the freed convicts as a sort of resistance movement, while Oswin defeats and captures Gavyn, Clryssa and Merria. 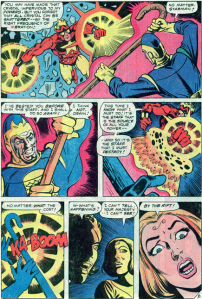 Oswin imprisons Starman in a crystal chamber seemingly impervious to his powers, but Gavyn manages to escape, and he and the evil Lord Protector face off for the last time.  The resulting explosion appears to kill them both, but Starman leaves behind a message indicating that he survived. 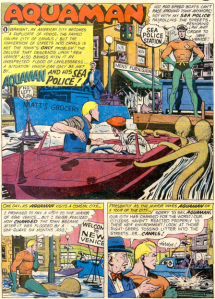 After an earthquake partially sinks a city, it adapts to having canals instead of streets, but crime goes rampant.  Aquaman comes to check on how the city is doing, and is asked to help stop the crime wave, in Adventure 264 (Sept 59) 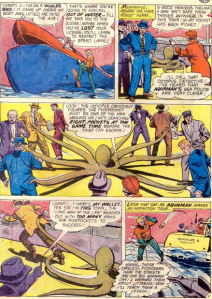 It appears that the city was actually named New Venice even before the earthquake. Certainly no mention is made of changing its name.

This is a breezy, light-hearted tale, with Ramona Fradon clearly having fun with it.  Love the panel with Topo checking an entire crowd at once to find a pickpocket.

When the people discover that a fissure has opened on the sea floor, which will drain the water from the city, they are dismayed, and Aquaman has his sea creatures help seal it, maintaining the canals of New Venice. 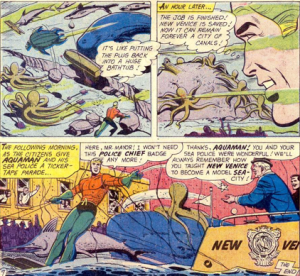 What makes this story worth including is that New Venice becomes Aquaman’s base of operations in the early 80s.  The city does not appear between now and then.

New Venice can also be seen as a forerunner of Sub Diego, which takes the concept of the flooded city to its extremes.