The Shining Knight’s series ends with Adventure 166 (July 1951), and it goes out on a decent note.  Frazetta may be gone, but this story and one in the previous issue were drawn by Ramona Fradon, and the art is more than passable.

Sir Butch accompanies the Knight to Mexico, where they come across a lost Aztec civilization, and bad guys who want to enslave them.  The Aztecs are lead by Quetza, who turns out to be their princess, who dons men’s armour to face down invaders.

At some point after this story, the Shining Knight joins the other Seven Soldiers of Victory in their battle with the Nebula Man, which displaces them all in time.  A double displacement for Sir Justin, I suppose.  He next appears in JLA 100 as the Justice League and Justice Society track them all down.

Sir Butch has never appeared since this story.  As it ends with Quetza inviting Sir Butch and the Knight back, I take it that Butch and Quetza hit it off, and he wound up marrying her and living with the lost Aztecs for the remainder of his life.

Johnny Quick finally gets an origin story in Adventure 159 (Dec 50), a mere nine years after the character debuted.

The story is entertaining, pitting Johnny against another university student who gets the same abilities.  Very few Johnny Quick stories had him take on villains who had any sort of powers. 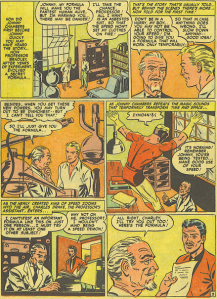 The problem I have with the origin is that it is his professor who devises the speed formula.  Johnny is simply the first one to try it out, and use it nobly.  Later continuity would downplay this, to the point of ignoring it, and have Johnny develop the formula on his own. 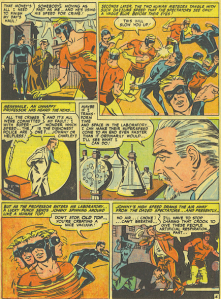 The story also has its own problems with continuity, in that both Johnny and the villainous Charley are immediately able to use the speed formula to fly.  This use of the power did not appear in the earliest Johnny Quick stories, and only sort of developed unintentionally, a byproduct of the way Johnny’s speed was shown, with multiple images in the same panel.  Fitting many Johnnys into one panel relied using all the space available, and Johnny was shown in the air before the stories actually admitted that he had the power of flight. 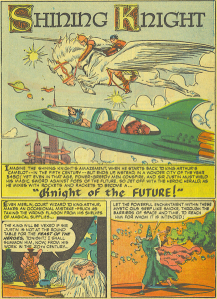 As much as I love Frazetta’s art on this series, I feel a little let down by this tale, which doesn’t show a future world to a degree I would wish.

Sir Justin winds up stumbling into a plot to overthrow the government and establish a dictatorship, while Sir Butch falls in love with the daughter of the Chief Councillor.  Merlin retrieves the two of them and brings them to Camelot just after Sir Justin defeats the conspirators, but before Sir Butch can even get his first kiss.

Adventure 150 (March 1950) features the first of eight Shining Knight stories drawn by Frank Frazetta.  There eight stories would be the ones consistently reprinted, the quality of the art surpassing even Moreira’s work.

But they would not run in consecutive issues.  The Shining Knight’s appearances in Adventure Comics were already sporadic by this point. The series was not alternated with any other strip, instead the pages given to the other strips running at this point.  It’s a shame, really, as none of the others matched the quality of this work.

The story is a simple one, which nevertheless runs far afield on historical accuracy.  Sir Butch is devastated when a ancient document is found proclaiming the Shining Knight a coward, but Sir Justin relates the truth of the events, a story that pits an Arthurian knight against vikings. 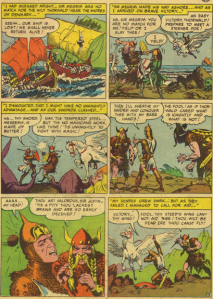 Ruben Moreira brings the art on Shining Knight back up to snuff in Adventure 144 (Sept. 49), on an entertaining tale in which Sir Butch opens a store selling 20th century goods in Camelot.

It’s entertainingly told by Otto Binder, with the medieval soldiers not knowing what soap or solder are for.  Sir Butch discovers that some of the coins he has been paid with are counterfeit, and though they catch the one behind it, the fake coins turn out to be even more valuable, as they are made of platinum.

Johnny Quick also has an above-par story in this issue, again written by Otto Binder.  An innocent man is released after serving five years in prison for a crime he did not commit.  In an attempt to help him get back his wasted years, Johnny shares his speed formula with him.

Together they try out careers in writing, composing, painting, sculpting and architecture, all without success.  I might quibble with the idea that writing five years of stories in a few minutes does not accurately duplicate five years actually spent writing, but why bother when the story is fun?  At the end the man discovers his true abilities lie in inventing, which was how he spent his time in prison. 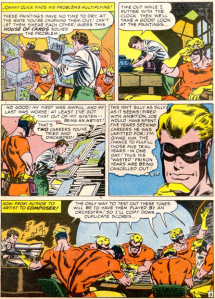 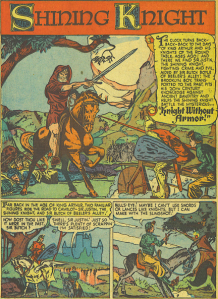 With Adventure 139 (April 1949) the Shining Knight series suddenly starts looking good.  Who is this artist?  I have hunted around the net, but cannot find a credit for him.

The story is set entirely in Camelot, although the Knight and Sir Butch do leave for the “present” at the end of the tale.

The Shining Knight faces an enemy with a magnetic sword in the story, but defeats him using 20th century items – a parachute, surfboard, roller skates and a scooter.  It reads better than I made it sound.

The Aquaman story in Adventure 132 (Sept 48) is the first of many that will toy with the idea of an “Aquagirl.”  Most heroes had a romantic interest of some sort, even if she was a villain, but Aquaman’s nautical exploits kept him acting solo, and single.

As would be the case for many years to come, the “mermaid” in this story is no such thing.  She was being blackmailed into pretending to be a mermaid as part of an elaborate hoax by an embezzler to make the witness to his crime, and to the mermaid, seem insane.

Sir Butch gets a proper introduction and “origin” in the Shining Knight story in this issue.  It’s likely this story was written before his first appearance 8 months earlier, but also possible that it was not, despite taking place before it.  The earlier story may have been run as a try-out of the concept, and positive reader response made them bring back the character.

Butch is introduced as a tough street kid, who nonetheless happens to hang out in museums mocking the exhibits.  Wanting to teach the boy some respect for history, Sir Justin gets into his Shining Knight garb just as Merlin casts a spell to transport the Knight back to Camelot, which has the effect of bringing the boy along as well. 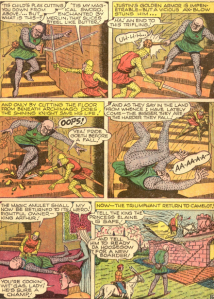 Butch accompanies the Knight as he battles Archimago (who was also the bad guy in the earlier Sir Butch story), and frees the captive Elaine.  The rest of the Knights of the Round Table had beat defeated by Archimago, and King Arthur had Merlin bring the Shining Knight back in time as a last resort.

Butch does nothing to help defeat Archimago, but is knighted by King Arthur anyway, becoming Sir Butch as the story ends.

With no real introduction or explanation, the Shining Knight abruptly has a child sidekick as of Adventure 124 (January 1948), with the unfortunate name of Sir Butch.  Later stories would expand this to Sir Butch of Beller’s Alley which succeeds at making him sound like a poor street kid, but still fails to make him sound tough

The time portal opened by Merlin a while back clearly remained in some form, as an earthquake opens it up in this story, sending Sir Justin, Sir Butch back to Camelot.  There they discover that Excalibur has been stolen, and set out to retrieve it. 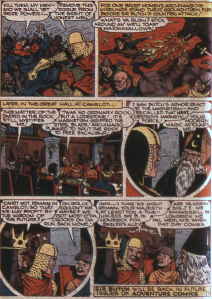 At the end of the story, at King Arthur’s request, the Shining Knight and Sir Butch agree to stay a while in Camelot, but as of the next issue they are back in the present.  Clearly this story went over well, though, as within a few months they would be travelling back and forth from the present to the past regularly. 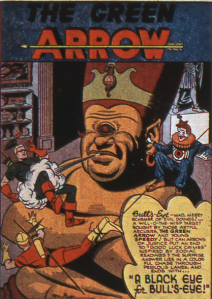 Green Arrow faces off against Bull’s-Eye yet again.  This is actually their fourth encounter in Adventure.  I didn’t include the battle they had in issue 119 because it was not very good, and neither is my scan of the issue.

In this story, Bull’s-Eye decides to do a series of crimes on the “eye” theme, culminating in an attempted theft from a large jewelled idol.

Even with this the writer has trouble staying on theme, as Bull’s-Eye robs patrons at a production of Carmen, because the opera climaxes with a bullfight.  And bulls have eyes.