Batman learns secrets behind his father’s murder in Detective 235 (Sept. 56), in a Bill Finger/Sheldon Moldoff tale. 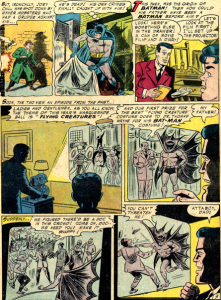 Poking around the Manor, Bruce and Dick discover a box containing a variation on the Batman costume, as well as a roll of film.  The home movie spurs Bruce’s memory, of his father and the gangster Lew Moxon, whom his father humiliated at a costume ball. 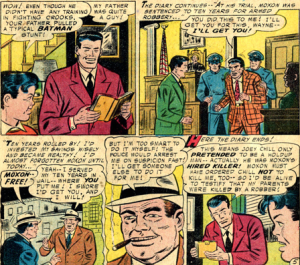 Bruce realizes that Moxon hired Joe Chill to kill his father, the attack was not random. Batman confronts Moxon, who has prospered over the years, but also sustained an injury that has left him with amnesia about his early days.  He is still a mobster, though, and Batman’s interest is not welcome.

Batman gains evidence of Moxon’s current wrongdoings, but his costume got wrecked in a fight.  He dons his father’s costume to confront Moxon, whose memory is restored by the sight of it.  Rushing out in terror, he gets hit by a truck.

Much, much later, around the millenium, Moxon was brought back into the comics, as having survived the accident, but been in prison for years. 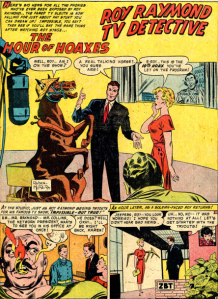 Roy Raymond’s standards seem to vanish when it comes to choosing guests, and Karen Duncan is mystified in this Ruben Moreira tale.

Karen is more in focus in this story than usual, as she cannot fathom why Roy keeps allowing obvious frauds to appear on an upcoming broadcast.  She discovers a ratings sheet that does not look good, and figures that Roy has become desperate to draw an audience.

The actual explanation is incredibly complex.  A cover story about giving air time to people who usually fail, and a plot to foil a foreign spy by using airwaves to mess up a missile launch.

Detective 33 – the origin of Batman, Larry Steele gets a new secretary, and Speed Saunders heads to Canada 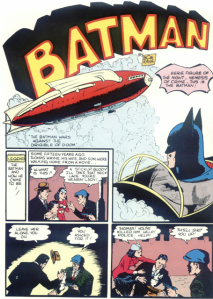 Batman’s origin is told for the first time in this story.  The basic elements of Bill Finger and Bob Kane’s story have never really changed.  The parents gunned down on the street, right in front of the boy.  The text informs us that the mother was shot, as well as the father, though we do not see this.  That would be changed, down to the road, to her dying from a heart attack after Thomas gets shot.

The rest of the origin is simple and straight-forward, and in its direct narrative line makes it all seem within the realms of possibility and rationality.  Batman’s intelligence and fighting skills are explained, as is his eternal goal.  The bat flying through the window as inspiration gives it just the touch of strange/supernatural that it needs. 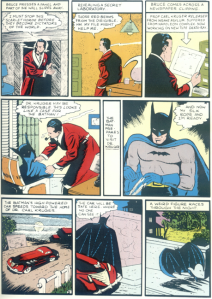 The story then shows us that Batman uses a secret passage to get at his gear, and the trunk containing his costume is in this room.  The ears on the suit are almost down to what would become their normal level.  The car is still described as being special, but nothing visually stands out about it.  It’s really long. 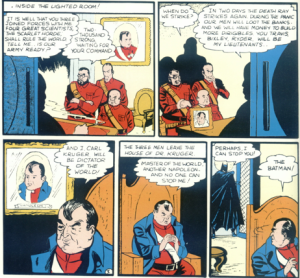 The villain in this issue patterns himself on Napoleon, and has a dirigible he is using to terrorize people.  The story is set in the US, but comes between two stories set in Europe, and I don’t think it’s too much of a stretch to include this tale in Bruce’s time in Europe.  Certainly a Napoleonic villain would fit very well in France, where the following issue’s story is set. 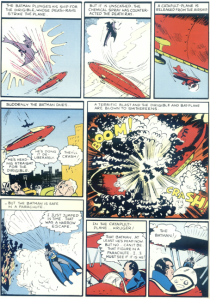 The Batgyro sees some more action, getting into a fight with, and destroying, the dirigible of doom!

Larry Steele gets a new secretary in this story, Brenda Darling. She’s a capable brunette, able to shoot the gun out of a killers hand.

Speed heads to Canada in this story by Fred Guardineer, helping the Mounties catch a man who murders fur trappers and steals their pelts.  Trees, rock, moose, canoes, Mounties, this hits almost all the Canadian stereotypes, though no one speaks french.