Detective 80 – the end of Two-Face

Bill Finger, Bob Kane and Jerry Robinson being the story of Harvey Kent to a conclusion in Detective 80 (Oct. 43).  Two-Face gets back out onto the streets, and continues his life of crime.

Batman and Robin track Harvey to his lair, a moodily drawn double masted schooner, but is unaware that he is being followed as well.

Batman confronts Two-Face, who pulls a gun and shoots.  Gilda dives in front, taking the bullet, which shocks Harvey back to his senses.

He goes to say good-bye to his criminal buddies, who are none too keen on seeing him reform, and tie him up, forcing him to plan their next crime. 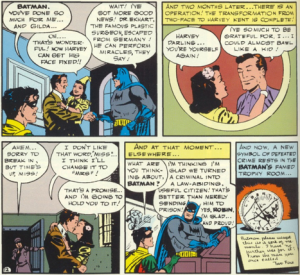 Batman intervenes, Harvey gets freed, and after pleading guilty is sentenced to only a year in prison.  Once he gets out he gets facial surgery, and he and Gilda are left to live happily ever after.

The next time this character appeared, five years down the road, he was called Harvey Dent.  The name was changed to avoid “confusion” with Clark Kent.  But in the 80s, in a Mr. and Mrs. Superman story from Superman Family, we see Harvey and Gilda Kent, happily married, and attending the wedding of Bruce Wayne and Selina Kyle, so this Harvey really did recover from his time as Two-Face,

Detective 79 – Batman in “Destiny’s Auction,” the Crimson Avenger vs the Adder,and the Boy Commandos in Italy 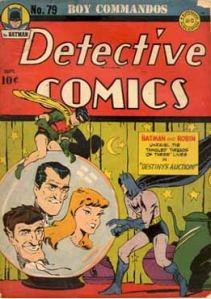 Detective 79 (Sept. 43) features “Destiny’s Auction” as its Batman and Robin story, one of my favourite Batman stories from this period.

Jerry Anderson does the art as Madame Calagra tells the future of an aspiring actress, an aging actor, and a rising hoodlum.  They interpret the destinies in a positive way – but things go very wrong for each of them, in ways suiting the words.

There are three identical trunks, one with stolen gems, and another an unpublished manuscript.  Batman and Robin get involved, and the lives of the three enmesh. 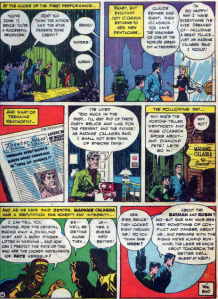 Big happy ending (except for the hoodlum), and those three fortunes from the opening have come true again, in a positive way.

The Crimson Avenger and Wing go up against the Adder in this story, although the Adder appears rarely.  Mostly its Lee and Wing taking on his assistant. 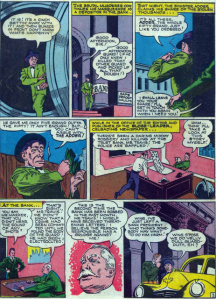 Banks are being robbed, and bank presidents apprehended and killed.

The Crimson Avenger and Wing jump around a lot and hit a lot of people.  They finally encounter the Adder, who gets unmasked and revealed to be the bank president seen at the beginning, who faked his own murder.

Not someone who would likely be a recurring villain, and there is nothing serpentine about the Adder or his outfit either.

Mussolini appears on the splash page, and the final panel, of this Simon and Kirby Boy Commandos story, but unfortunately not in the story itself. 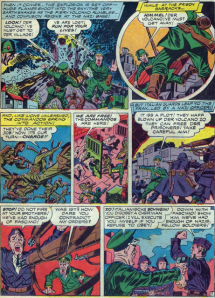 Rip leads the boys to Italy, where they encounter many Italian partisans, who desire the overthrow of Mussolini.  With the Boys, they work to kick out German occupiers.

Detective 76 – the Joker becomes a florist, and the Boy Commandos meet Sandman and the Newsboy Legion

Jerry Robinson takes over the pencilling on the Batman story in Detective 76 (June 1943), making Batman and his crew look a little more life-like, less stylized.

The story suits the change, as the Joker makes himself look “normal” as he takes over a flower shop.

The plants he sells come in pots that are rigged with chloroform gas, knocking out the owners and leaving the house free to be robbed.  Having figured out the plan, Bruce buys some flowers, but removes the gas from the pots.  He, Dick and Alfred pretend to be asleep, but once the Joker’s men have robbed them, change clothes and take them down.

Simon and Kirby bring most of their characters together in this Boy Commandos story, as the Boys are brought to the US on a publicity campaign.

Waiting to greet them once they arrive in New York are Sandman and Sandy, as well as the Guardian and the Newsboy Legion. 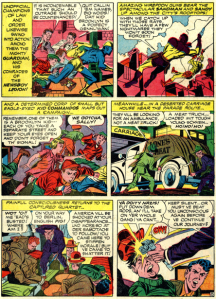 The Nazis are also out in force, to kidnap the boys and make the publicity campaign a disaster for morale.  When the kids go missing, the other heroes jump into action to find them, but the Boys free themselves and Rip, and get to meet Roosevelt at the White House. 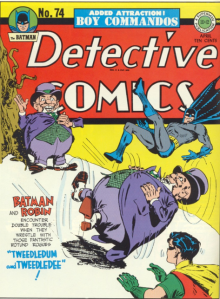 Two of Batman’s most frequent enemies from the 1940s, Tweedledum and Tweedledee, are introduced in Detective 74 (April 1943), with art by Bob Kane and Jerry Robinson.

The story begins with Batman and Robin getting confused, and then electric shocked, by what appear to be identical twins.

Heading to a tailor who runs a store for oversized men, Bruce and Dick learn that the two men are actually cousins, Deever and Dumfree Tweed, and seek out their house.

Though it would not usually be their “shtick,” in this first story they dress up as the Alice in Wonderland characters, along with a Mad Hatter and March Hare as muscle, in order to rob a costume ball.  Batman nixes that plan.

Simon and Kirby put Rip Carter on trial in this Boy Commandos story.  Though it’s not for the reckless endangerment of children.  Taking the kids into battle is just fine.

Instead, he is charged with disobeying orders, leading to casualties among the troops.  Rip, and others, relate the story behind this, which has to do with a cowardly British officer.

It’s not the best Boy Commandos story, it’s a bit heavy on text, and the ending is awkward, with one of the judges revealed as the penitent father of the cowardly officer, so Rip gets acquitted.  And not as much good battle art as usual, either.

Detective 73 – Batman vs the Scarecrow, the Boy Commandos and the tin box, and the Crimson Avenger gets a cloud

The Scarecrow makes his second appearance in Detective 73 (March 1943), which turns out to be the last appearance of the character until the 1960s.  Bob Kane and Jerry Robinson illustrate.

Professor Crane is out of prison, and has thought up a new set of crimes, which have absolutely nothing to do with fear or scaring people at all.  Nope, instead he has a little blackboard and leaves three letter rhyming clues (vat, mat, yat).  What a let down.  Linda Page appears briefly, buying a ridiculous hat. 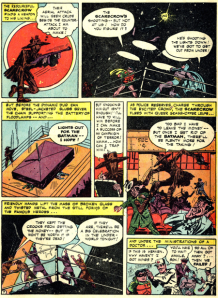 The Scarecrow does hoist a nasty looking machine gun, but without the fear gas element (which had been created by Hugo Strange before the Scarecrow was introduced), the character just doesn’t sing. 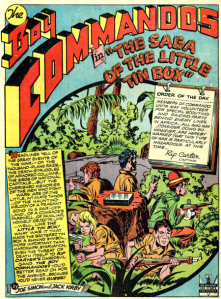 Simon and Kirby give each of the boys a chance to shine in this tale, which sees the Boy Commandos navigate a dense jungle to deliver a little tin box.

There are Nazis pursuing them, of course, but unlike the other tales to date, this one gives much more play to the team itself.  Brooklyn still manages to grab focus.

The tin box is revealed to be tin foil wrappers, and Rip Carter explains the importance of recycling stuff for war.  So propaganda again, but far more readable than the Japanese one. 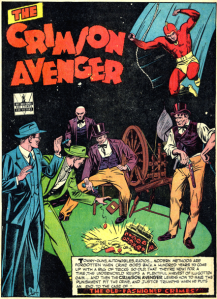 The Crimson Avenger starts using a capsule that releases a crimson smoke cloud, which he uses for dramatic entrances and exits, and also for messing up the bad guys during a fight.  It seems to affect the brain at times. 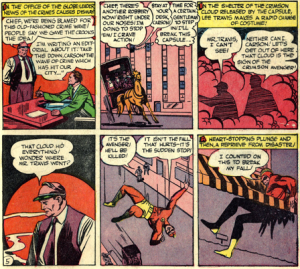 The City Desk Editor is left befuddled at Lee Travis’ disappearance, while Lee himself managed to change costume and fall out a window.

The Crimson Avenger and Wing are pursuing a mob boss who likes his people to dress and use tech from the turn of the century.  A mob boss keeping his people behind the times is not likely to triumph.

Detective 72 – Batman fights the judge, and the Boy Commandos play with flowers 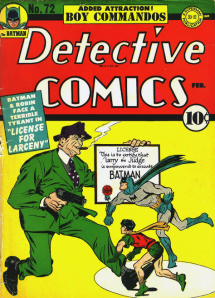 Bob Kane and Jerry Robinson contribute the art on the Batman story in Detective 72 (Feb. 43).  The cover accurately bills the story, “License for Larceny.”

A financial investor, J. Spencer Lawson, is also a gangland boss, Larry the Judge, who issues licenses to his men, determining what crimes they are allowed to commit, and imposing penalties on those who disobey.  This could be, if it was written now, a really harsh and disturbing tale, but it’s 1943 so it’s not. 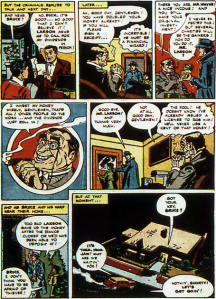 As a financial investor, he learns all about his clients, so he knows who to rob, and of what.  Bruce Wayne falls into his grasp, but Batman takes him down.

This tale also includes a rare, external shot of Wayne’s house.  The term “manor” ceased being used during the war, and the house looks much smaller and less ostentatious than expected. 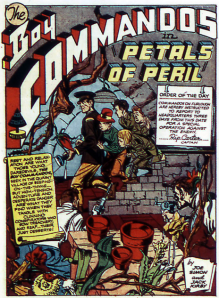 This Boy Commandos story, by Simon and Kirby, has the kids in rural England, stumbling upon a nest of spies. 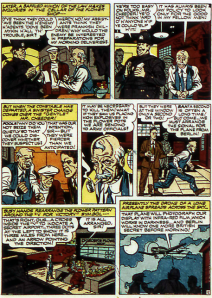 The insidious foes meet in the basement of a flower shop, and they are smuggling explosives in the flower pots.  The Boys stumble across this, and mess up their plans.

This is the first story in which Brooklyn is really given a chance to shine.  He had always been the stand-out character, with his dialect and personality, but was usually given equal time with the rest of the team.  Now he starts to move to the front.

Detective 71 – the Joker’s Crime-a-Day, and the Boy Commandos go AWOL 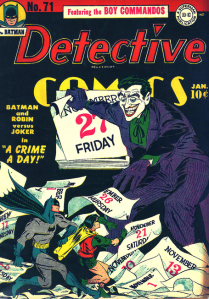 Great cover for this Bill Finger/Bob Kane/Jerry Robinson story from Detective 71 (Jan. 43), in which the Joker gives daily clues to his upcoming crimes.

Batman begins giving a series of public lectures, and the coverage makes the Joker jealous, so the whole series of crimes are just an effort to upstage Batman. 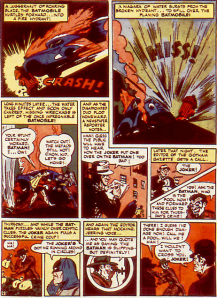 It’s a Christmas story for the Boy Commandos, thank to Simon and Kirby.

Rip Carter and the Boys are playing Santa for some war orphans, and are moved to go and lead a rescue of the father of one of them.  The impetuous boys don’t realize it, but they go AWOL in order to do so.  Rip does inform them of this, but only after they’ve already stolen the jeep to do so.

But no one is likely to get court-martialled in a Christmas story anyway.