Archive for the ‘Uncategorized’ Category

up to the fourth blog now, which will finish off Superman, and go through Flash Comics and into Batman

After far too long a delay, I am back on the net, and the second blog has begun!

I hope that links to it.

Detective 567 – Batman by Harlan Ellison, Green Arrow ends, and so does this blog 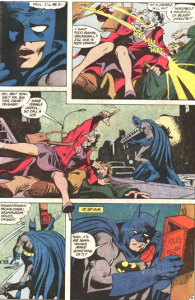 It’s a hilarious read.  We follow Batman on an untypical night.  A night in which shopkeepers and old ladies are able to defend themselves.  A night where a potential mugging in a park is really just some kids running around after a concert.

Every “crime” Batman spots turns out to be something else, and the most use he proves during the evening is holding a flashlight for a repairman.

What I find very interesting, though, is his comment to Alfred on the last page about it being a bad night.  Usually Batman defends his eternal mission by saying that he is trying to being peace to Gotham.  But in this story, when he is not needed to do that, instead of rejoicing, relaxing or celebrating, he is miserable and depressed.

Joey Cavalieri and Stan Woch bring Green Arrow’s series to a conclusion in this issue, as the mystery villain unmasks.  His identity is no clearer for that, but he does look scary.

Understanding that his skull is not instantly recognizable, he helpfully explains that he was the one behind the assault on the temple, who seemingly died when he found the Book of Ages.

But he didn’t die. He’s back.  And he’s calling himself Barricade now, for no particular reason.  Who cares, he looks cool and this final story is a big fight scene, as he takes on Green Arrow, Black Canary and Onyx.

And that kid who had been putting up with Onyx for far too long finally looks about to get some action out of it.  Although it is odd that the series ends on these two, instead of on Oliver and Dinah.

Of the three, Black Canary is the next to appear, almost immediately, in the pages of the crossover miniseries Legends, which leads into the new Justice League.

Green Arrow does not appear at all for almost a year.  A future version of him shows up in Batman – The Dark Knight Returns, and a few months later he gets his own miniseries, the Longbow Hunters, which launches his own book.

Onyx does return as well, but not for an awfully long time.  I’m not 100% sure where and when she does return, though I will find it, but by the time of War Games, she is part of the Batman universe, working with Orpheus.

And that ends this blog!  Not that it ends me writing about DC Comics, but the media library is 97% full.

I chose to cut it off here as the next issue is a Legends crossover, and part of the post-Crisis universe.  This story falls sort of between the pre- and post- Crisis worlds, but contained the end of the Green Arrow run.

So I am starting a new blog, Babblings about DC Comics 2.  I will finish off covering Detective, and then move on to Action Comics. That had even more issues than Detective, so I am not certain I will get all the way through it in the second blog, but I’m hoping to. 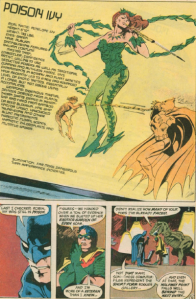 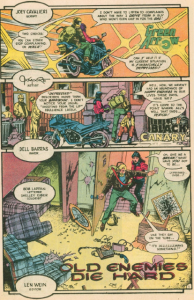 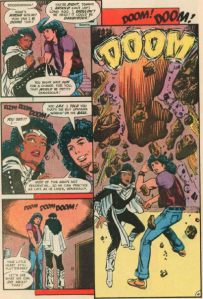 Detective 565 – Batman vs the Love Killer, and Steelclaw goes too far

Moench and Colan put some strain on Batman and Catwoman’s relationship in Detective 565 (Aug. 86), as the horrific murders of the Love Killer grab their attention. 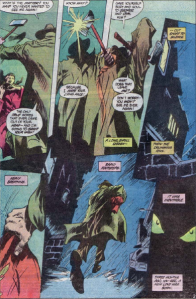 Colan’s art is used to terrifying effect with this maniac who beheads women.

As the hunt for him drags on, Batman finds Catwoman getting colder and more distant.  When he raises the subject with her, she finds a lot of excuses, but suggests that the two of them are basically loners anyway.

Some of the dialogue seems to imply that Catwoman is about to go back to an old boyfriend, but all is made clear when she returns to her pet jaguar as the story ends.

The fight with the Love Killer concludes in the next issue of Batman.

There’s action aplenty in this Green Arrow installment, by Cavalieri and Stan Woch.

Steelclaw has pushed everything a bit too far.  His manipulations as the mayor have made the mob distrust Steelclaw, and his arrogance and demands in that position have won him no friends either.  The mob wind up turning on him and killing him. 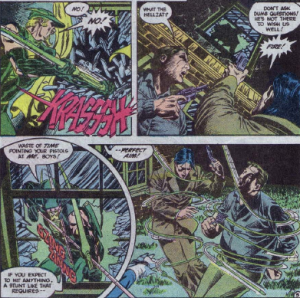 Green Arrow and Black Canary are left to take down the rest of the mob’s men, but all that they do with Steelclaw’s body is unmask it. 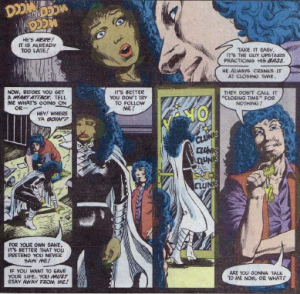 And that boy that Onyx has been using in Star City for food, shelter and support finally starts showing some backbone and demanding some answers from her.

Detective 564 (July 1986) has the penultimate chapter of the Two-Face saga, by Moench and Colan. 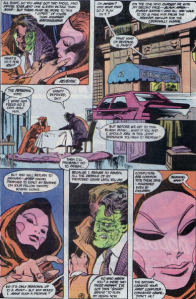 Circe convinces Two-Face that their mangled visages give them a bond, but it’s fairly clear that she is just using him.  Poor Harvey is too lost in his madness to see it.

Catwoman is onto her game, though, and takes her place.  The mask being as useful to hide Circe’s scars as to conceal Catwoman’s identity.  Two-Face discovers this, and is not pleased to be played with this way.

Cavalieri and Moore bring the Steelclaw story together in this chapter.

Knowing that Steelclaw is the mayor, Green Arrow and Black Canary head to his estate.  He tries to use his power from both ends, as the mayor and as Steelclaw to have them taken down. 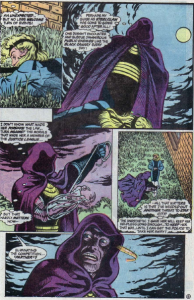 Some excellent art by Jerome K Moore on this chapter.  The mafia and the heroes converge on the mayor’s mansion as the climax approaches. 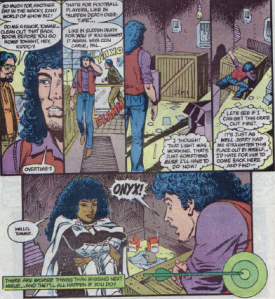 But wait! Look who is back as well!  Onyx!