Detective 488 – The Spook sends Batman to death row, Tales of Gotham City begins, Batgirl comes home, the Elongated Man looks for a car, and Robin gets a new girlfriend 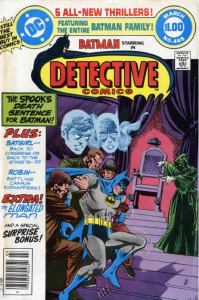 Detective 488 (Feb./March 1980) sees the Spook return.  He had last appeared in an issue of Batman two years earlier.  Cary Burkett scripts, with Don Newton on the art.

The story also sees Selina Kyle appear, in her budding romance with Bruce Wayne, which had been happening in the pages of Batman.  She, along with much of Gotham, has been reading a runaway best-seller by a man on death row.  His agent and publisher both talk about how much money they could make off a sequel, but of course the author is due to be executed.

The Spook gets hired to break the man out of prison, and the story adds a mystery element by keeping the identity of the man behind it a secret.

Lucius Fox, who had been introduced months earlier in Batman, also makes an appearance in this story. giving more background information on the writer.

The Spook lures Batman to the prison, and uses some special who knows what to make everyone see Batman as the man on death row.  So the Spook breaks the writer out of prison, but no one realizes it, and Batman is due to be executed in his place.

The Spook even shows up to taunt Batman.  Of course, he manages to escape and catch the writer, the man who hired the Spook, and the big name villain as well.

This was pretty much the last appearance of the Spook, so far as I recall, aside from a couple of stories in the next few years that feature huge line-ups of Batman villains.

Denny O’Neil scripts the first installment of a new series, Tales of Gotham City.  Some of the stories would feature known characters, but the best of these stories dealt with the every day people of Gotham.

The first story deals with a cop on his last day before retirement.  He was proud of his record, that he had never had to pull his gun during his time on the force.

He winds up on a subway car with an escaped convict disguised as a woman, who disappears during the moments the train blacks out in a tunnel. 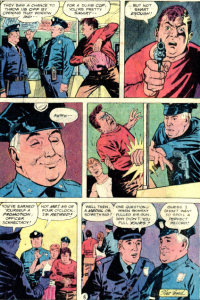 It’s a good mystery, for its brevity, and comes to a warm and fuzzy conclusion as the cop subdues the convict without needing to pull his gun and break his perfect record.

True, this is not the dark and seedy Gotham we have come to know and love, but the series would move there.

Batgirl returns to Gotham in this story by Jack C Harris, with art by Jose Delbo and Frank Chiaramonte.

The main part of the story deals with rival gang on the verge of a war after the leader of one is murdered, but the better scenes are between Barbara and her father, as they discuss her loss in the recent election.  What caused it, what lessons to take, and where to go from here.

She averts the gang war, proving that the leader was killed by one of his own gang.

The final scene shows the exterior of Commissioner Gordon’s house, not something often seen.  He sure seems to make a lot of money as a police commissioner.  I don’t think there is any other story showing him living in such a massive house.

The Elongated Man is back, with a mysterious car theft in front of a huge crowd, told by Mike W Barr, with art by Eduardo Barreto and Joe Giella.  I don’t know if it’s because this is very early Barreto, or it’s Giella’s inks, but it looks absolutely nothing like his later work. 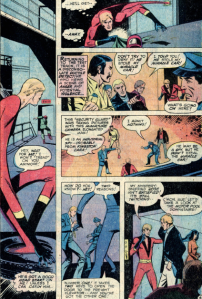 The mystery is good enough.  The car simply vanishes, leaving no trace, and Ralph is puzzled until a chance remark by Sue makes him realize the car the crowd saw was just a collapsable shell, not a real car at all.

Robin’s story, by Jack C Harris, with art by Schaffenberger and Colletta, has a number of wealthy students get kidnapped the first day of the semester.

One of those grabbed is Jennifer Anne, a pretty blonde that Dick Grayson has been scoping.  So of course he gets into Robin gear to go rescue her.

The kidnappings turn out to be more extensive than he thought, and Dick learns that he was an intended victim as well.  But knowing that he was meant to be grabbed makes him realize the poor kid, who was handing out assignments to help pay his tuition, is one of the bad guys. 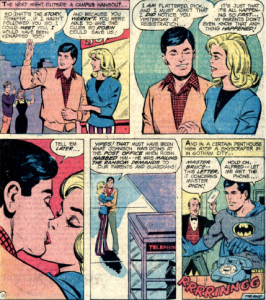 Robin rescues Jennifer, but Dick gets to make out with her.  There is a “funny” ending, as Alfred gets the ransom note just as Bruce gets Dick’s call about the situation.

But it bothers me that the message seems to be to not trust kids who have to work to pay their tuition.