Detective 500 – 4 Batman stories, two of them team-ups, scads of detectives, and Elongated Man and Hawkman end

Many anniversary issue build themselves up as being something really special, but few live up to their promise.  Detective 500 (March 1981) is one of the rare ones.  It’s not all gold, but enough of it is.

The first story, by Alan Brennert and Dick Giordano, bring us to a parallel world, where a new Batman is about to be born.

The Phantom Stranger brings Batman and Robin to this world, seemingly so that Bruce will have the opportunity to prevent his parents’ deaths.

They find this world similar, but different.  James Gordon is still just a lieutenant, and Barbara , though a librabrian, is his fiancee, not his daughter.  Bruce is hunting for information on Joe Chill, while Dick discovers that this is a world with no heroic legends, no caped heroes, nothing to inspire heroism.

Observing the Waynes, we see that Bruce is hardly a baby hero, more like a rich spoiled brat, but Batman is blind to this.

Batman’s pursuit of Joe Chill, who on this world is not even from Gotham, and just arriving in the city, brings him into conflict with Gordon, but Batman manages to convince him that they are friends on another world.

His search for Chill has raised such flags that the man is murdered by the Gotham mobs.  Batman learns that the planned murder of the Waynes is happening sooner than he expected – he had not counted the extra days from leap years. 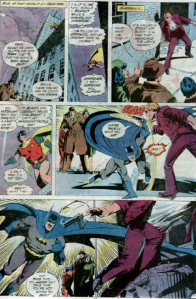 Robin, who has been watching the Waynes, sees the murder about to occur, and struggles within himself, thinking that is might be meant to be; but Batman swoops in saves the day, his parents, and himself.

The Phantom Stranger takes the heroes back to their own world, and they are left to wonder what will become of Bruce, but the reader gets to see the impact the attempted murder had, and that even with his parents alive, young Bruce is on the road to becoming Batman.

Sadly, this is not a parallel world we ever visit again.

Slam Bradley gets the billing, but this story, a re-write of a Batman tale from the 40s, by Len Wein and Jim Aparo, is pretty much a free for all with a vast line-up of detectives.

They are all at a celebration for an older detective, who gets murdered in front of them. 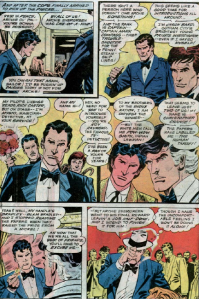 The original version of this story has Batman working with a number of detective based on famous fictional ones from the era.  This story brings Slam Bradley, Jason Bard, Captain Compass, Mysto, Pow-Wow Smith, the Human Target and Roy Raymond together on the case.

For Captain Compass, Mysto, Pow-Wow Smith and Slam Bradley, this the first time the character appeared since the end of their own series.

There are leads in a number of directions, which allow the detectives to split up and pursue them in smaller groups.  The story gives everyone at least one moment to shine, and they wind up stopping a number of bad guys.

Slam suspects there is more to the case, and it’s Roy Raymond who provides the real solution, that this was an elaborate suicide, designed to prompt the men to tidy up some hanging cases of his.

Jason Bard and the Human Target both return in the pages of Detective within the next couple of years, while Roy Raymond pops up in DC Comics Presents.  Many of the rest have their next, and final, appearances in Crisis on Infinite Earths.  Slam Bradley returns a little after Crisis, returning to the pages of Detective for one story. 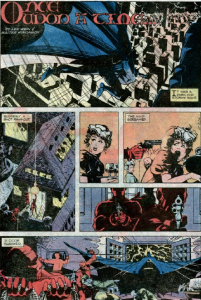 The next story in the issue is a wonderful 2-pager, by Len Wein and Walt Simonson, that uses Snoopy’s “It was a dark and stormy night…” as it’s text.  Clever, and visually gorgeous. 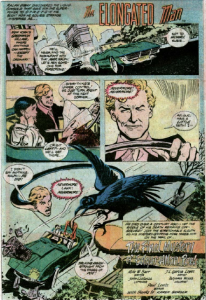 The Elongated Man gets his final solo story in this book, by Mike W Barr and Jose Luis Garcia-Lopez.  As well as being a decent mystery story on its own, it delves into the facts around the death of Edgar Allen Poe.

Chiefly, the identity of the mysterious “Reynolds” that Poe called out for shortly before dying.  The story has to do with a letter explaining who Reynolds was, and leading to an unpublished magazine by Poe. 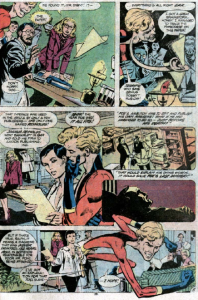 Garcia-Lopez’s art is great, and Ralph and Sue are always fun to read about. 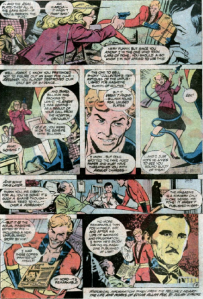 One of his best mysteries, this is also the Elongated Man’s last solo story until his miniseries in the 90s.

On the downside of the issue, there is this text story by Walter Gibson, with some scattered art by Tom Yeates.  I recall reading this as a kid, but not finding it particularly memorable.  And I dislike text stories like this in comics.  If I’m going to read a book, I’ll read a book.  I read comics for the visuals.

Hawkman also has his last solo story in Detective in this issue.  Well, kind of a solo, really he and Hawkgirl get equal roles.

Paul Levitz and Joe Kubert helm this tale, that sees Katar and Shayera trying to solve the mystery of the death of a scientist many years earlier. 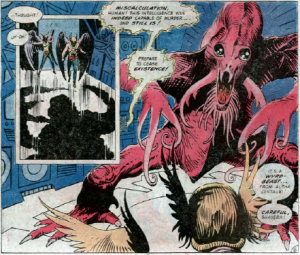 There’s some great Kubert art, and the story itself is not bad, but it’s a bit of a tease.

At the end, Hawkman reveals that the scientist whose death they were investigating was Dr. Erdel, who had died after bringing the Martian Manhunter to Earth.  J’onn had blamed himself, and Hawkman wanted proof that it was not J’onn’s fault.

Hawkman’s next solo outing is the Shadow War of Hawkman miniseries.

The final story in this issue was also a let-down to me.  Even moreso, as it’s a Batman/Deadman team-up, and those had been above average stories, on the whole.  But Carmine Infantino’s art is not what it was, and Cary Bates’ story doesn’t help much either. 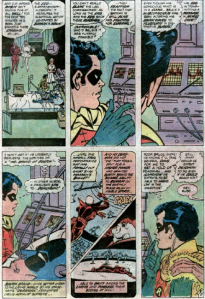 Pursuing some criminals, Batman gets killed.  Sort of.  Almost dead.  Robin is really stressed, but Deadman shows up and decides to inhabit Batman’s body to bring his killers to justice. 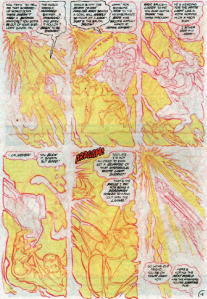 Oops, someone spilled a plate of scrambled eggs on the comic.  Oh, wait, that’s Infantino’s art for showing Batman and Deadman conversing on the astral plane.

Deadman moves Batman around and catches the bad guys, and doing so ignites the spark that brings him back to life.  A shame this story closed the issue.  It would have done less damage buried in the middle.

Another Joe Kubert cover for Detective 350 (April 1966).  He makes the Monarch of Menace look like a far more interesting and dangerous foe than the story by Robert Kanigher, Sheldon Moldoff and Joe Giella has him be. 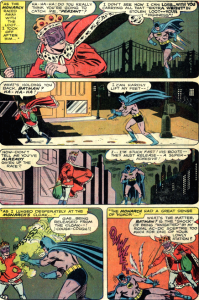 Batman tells Robin about a foe from his past, from his days before taking on a sidekick.  The Monarch of Menace was a mob boss Batman was never able to capture.  His costume included a cape that gave off a choking gas, an electrified sceptre, and a crown with hypnotic gems. 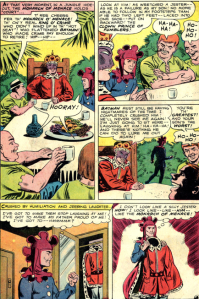 The story jumps to the present, and to the emotionally abused son of the Monarch, forced by his father to dress as a jester.  He steals a spare Monarch outfit from his father, to go on a crime spree himself and show what he can do.

It’s Robin who spots him, and captures the boy, who doesn’t know how to work the costume devices well enough.  I do like the way the story parallels the generations.

With some time to study the costume, Batman preps defenses against the weapons, and plays on the Monarch’s ego, broadcasting the capture of the son as if it were the real Monarch.  When the father comes out to face Batman, he is quickly defeated once his weapons are neutralized.

The Monarch of Menace returns in a Batman story in the early 80s.

The Elongated Man comes to the aid of Green Lantern in this Gardner Fox story, with art by Carmine Infantino and Sid Greene.

Realizing the Hal has lost his memory of being Green Lantern, Tom Kalmaku turns to the only publicly known hero, Ralph Dibny, for his help. 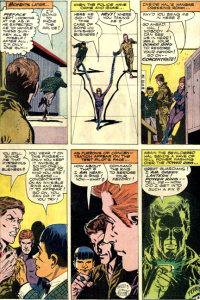 Ralph stops a robbery at Ferris Aircraft, but that’s incidental to the story.  Ralph helps Hal regain his memory, and the loss is explained as the result of exposure to a nebula. 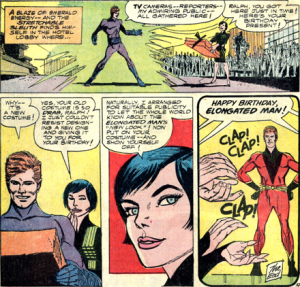 I don’t buy that for a second.  See, this is Ralph’s birthday, and though Sue presents him with a new costume as a present, I believe this whole tale was a birthday mystery that she arranged.  All it required was for Hal to pretend to lose his memory, and Hal is best buddies with Barry Allen.  Sue could easily have contacted Iris, and got her to get Barry to enlist Hal in the deception.

No one will ever convince me otherwise when it comes to this story.  Not even if Gardner Fox crawled out his grave to deny it.

Blockbuster makes his second appearance in Detective 349 (March 1966), in a story by Gardner Fox, Carmine Infantino and Joe Giella, with a cover by Joe Kubert. 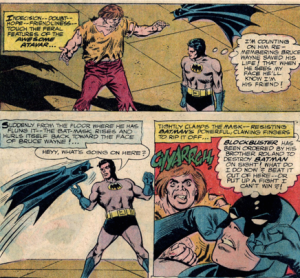 The story picks up from the previous one, as if no other stories had occurred in between.  Batman continues his hunt for Blockbuster, and finds him.  He unmasks in order to calm him down, but his mask flies right back onto his face, and will not come off again. 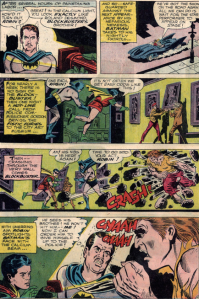 Batman paints the image of Mark’s brother Roland on his mask, made visible when Robin shines a special light on it.  Batman figures that, as Roland was able to control him before, he should be able to again, but this fails as well.  Batman defeats Blockbuster almost through luck, a karate chop, using a calcium-hardened glove, that happens to hit a weak spot on him. 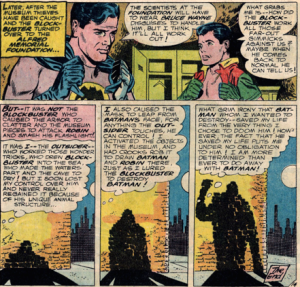 In the final few panels we see the shadow of the Outsider, and discover that he was behind the problems with the mask.  Blockbuster returns a few months down the road, in the pages of Justice League of America.