Detective 465 – Commissioner Gordon gets kidnapped, and the Calculator vs the Elongated Man

David V Reed gives some interesting details on how Batman operates in his story from Detective 465 (Nov. 76), with art by Ernie Chan and Frank Giacoia. 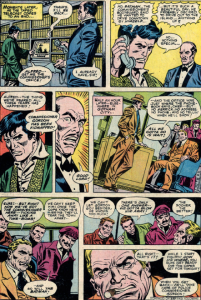 We discover that, a long time earlier, Batman had established a fake identity, and provided him with a home, office and secretary.  This identity would exist solely to be given by Commissioner Gordon is he were ever to be captured and forced to reveal Batman’s identity.  So when someone show up at the office asking questions, Bruce realizes Gordon has been kidnapped.

The latter part of the story is not as interesting, as Batman beats people up and fights his way to Gordon and the kidnappers. 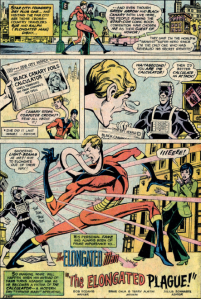 The Calculator stays in Star City, awaiting the Elongated Man, as he and Sue are scheduled to attend a comic book convention in this story, by Bob Rozakis, Ernie Chan and Terry Austin.

This one is all about stealing Ralph’s day.  His initial attack is passed off as the actions of a cosplayer, and Ralph is completely unprepared as he enters the hall, and causes everyone around his to stretch uncontrollably.  Of course he gets blamed.  The Calculator is on hand, but remaining perfectly still, and Ralph realizes that it’s movement that sets off the stretching. 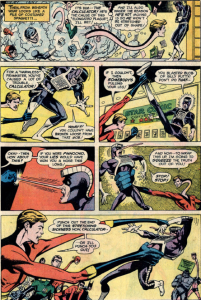 And thus we get the only story in which Ralph Dibny tortures a villain into giving up, simply by squeezing him.  And though he doesn’t realize it, he even presses the Calculator’s special button.

As much as I loved Detective 453 (Nov. 75) when I was a kid, I have to admit that the David V Reed story is a bit thin, although I can’t complain about the art by Chan and Royer.

Batman gets out of his cliffhanger predicament by throwing the gun at the screen, and then changing back into his disguise in the dark.

This issue deals with trying to determine who the cloaked head of the Crime Exchange is.  Batman and the police ramp up their game and keep taking down their crimes, while Gordon releases reports of fake crimes, all to make the Crime Exchange seek out their rival – once again, Batman in disguise.

In the end, the boss turns out to be a tv journalist, who had been consistently critical of Gordon and Batman.  But not a really big player in the story.  At 10, I loved it.

Detective 452 – Batman vs the Crime Exchange, and Hawkman vs Konrad Kaslak

452 (Oct. 75)  was my first issue of Detective Comics, and I would have just turned 10 years old when this came out.  The story, and its cliffhanger ending, captivated me so much I actively hunted for the follow up issue, the first time I had done that, I think.

David V Reed, Ernie Chan and Mike Royer craft this 2 part story, in which a well organized criminal outfit provides contacts, clients and information for Gotham’s gangs. Batman captures one of the killers who work for them, impersonates him, and attempts to infiltrate the organization.

He gets exposed, surrounded, and challenged to defend himself with a gun.  But Batman doesn’t use gun!  What will he do?  At 10 years old I had no idea and was deeply concerned until the next issue came out. 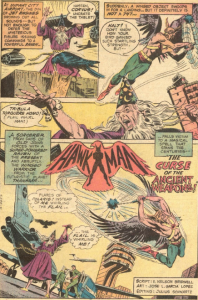 And at 10 years old I really hated the unusual Hawkman logo that was used for this story – and I still hate it now.  The actual tale, by E Nelson Bridwell and Jose Luis Garcia-Lopez, is pretty good though.  Hawkman has a lot of trouble against an evil magician and his thieving raven. 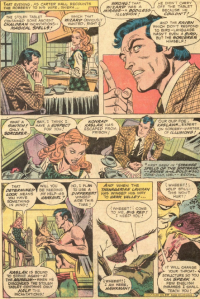 Shayera has a small role in this one, which also sees the return of Big Red, Hawkman’s bird sidekick, not seen since the mid 60s, in Hawkman’s old book. Hawkman realizes the magician is a distraction, the raven is the actual culprit, and Shayera informs him that Konrad Kaslak, one of their earliest enemies from back in Brave and the Bold, is out of prison.

Big Red swoops in for some bird on bird action, and Kaslak reverts to human form, and is simply no match for Hawkman.

This is the last appearance of Konrad Kaslak until the Hawkworld series in the 90s.  Big Red returns in Super Friends a few years down the road.

The cover of Detective 185 (July 1952) asks, what is the secret of Batman’s utility belt?  The story by David V Reed and Dick Sprang answers that – his secret identity is inside.

While he doesn’t go so far as to sew labels into it, Batman does create a disc with his name and address.  Incidentally, this is one of the extremely rare times Wayne Manor is given a specific address, 224 Park Drive.

Batman puts the disc in the belt and, wouldn’t you know it, loses the belt on the very next adventure.

A young boy finds it, but not the hidden disc.  He replaces the useful stuff with twigs and rocks, and then loses it as well.  It passes to a beggar and a rich man, before Batman finally gets on its track.  But so do some hoods who have learned it’s secret as well!

Batman tricks them with a second belt, and his identity is saved.

Not bad for a story about a belt.