Adventure 368 – The Legion’s battle of the sexes (reprise)

After the embarrassingly sexist “Revolt of the Girl Legionnaires” a few years ago, one could be sure that this version, by Jim Shooter and Curt Swan, would be much better, right?  After all, this is May of 1968.  But nope, Adventure 368 is just as bad as the earlier version.

Thora, an ambassador from the matriarchal world of Taltar comes to Earth, supposedly to meet with Kandro Boltax but really to increase the powers of the female Legionnaires, and get them to turn against their male teammates. 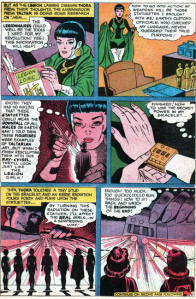 At first the power increase seems to just be a plus all around.  Duo Damsel can make hundreds of bodies, Shrinking Violet can grow or shrink, Phantom Girl can make others intangible, Supergirl is immune to kryptonite, and so on. 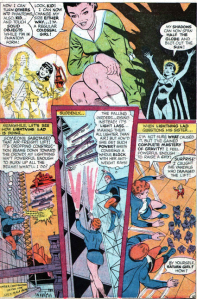 Brainiac 5 is suspicious of the situation, and acting on his advice, Invisible Kid orders the women quarantined.  They take that as jealousy, and, fanned by the effect of Thora’s power charge, rebel and battle the boys. 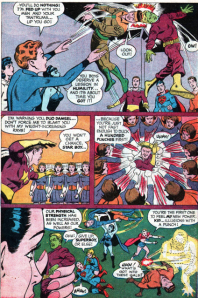 There has been no element of the romances on the team through much of this story, but when Shadow Lass starts expressing her disdain for Brainiac 5, whom she feels rejected her, Supergirl’s love for him causes the “spell” on her to break.  She figures out that Thora is behind it, and causes her bracelet, the source of the power charge, to break.  Thora kills herself, and we hear that the matriarchy on her planet has been overthrown, and men returned to their rightful place of dominance.

OK, just as bad as before.

Adventure 361 – the debut of the Dominators 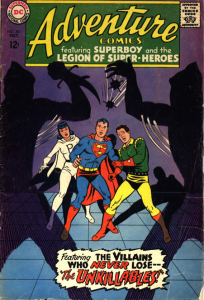 The Dominators make their first appearance in this story by Jim Shooter and Curt Swan, though they are not the villains in Adventure 361 (Oct 67).  Kandro Boltax also makes his real first appearance, having been impersonated in the previous two issues.

The Dominators are introduced as having been at war with the United Planets for 20 years, but currently negotiating a peace settlement.  Kandro Boltax asks the Legion to escort them through an “under-dimension,” as anto-Domintor feelings are high, and there is information indicating that the delegates will be attacked by assassins known as the Unkillables. 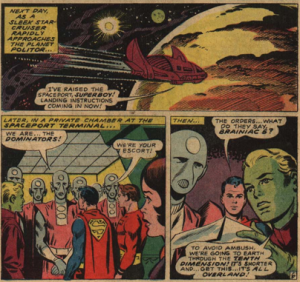 Little is developed about the Dominators in this tale, and they only sightly resemble their later appearance.  There is no element of the caste system, or differently sized discs on their heads.

The story is meant to be suspenseful – the Legionnaires wonder when and where they will be attacked, and whether they can trust the Dominators, but it never really picks up, at least in my eyes. 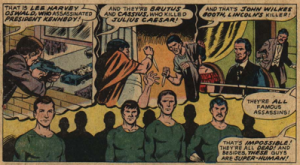 Ultimately, it turns out the entire mission was a ruse, as the Dominators they are accompanying are just three-dimensional illusions.  The revelation that the Unkillables are clones of Brutus, Cassius, John Wilkes Booth and Lee Harvey Oswald doesn’t help the tale either.  Finally, Jim Mooney’s inks all but obliterate Curt Swan’s pencils.

The Dominators do not return until the Earthwar saga in the 70s.

Adventure 360 – The Legion in chains

Adventure 360 (Sept 67) cuts between the Legionnaires imprisoned on Takron-Galtos, those running a resistance movement on Earth, and a mysterious villain whose identity is subtly hinted at, but not revealed until the conclusion of Jim Shooter and Curt Swan’s tale.

After checking to see that Superboy, Mon-El and Ultra Boy are still safely imprisoned, Kandro Boltax goes to check on his very immobile and unemotional son.  Really perceptive readers might be able to identify this lad, but this scene is about as close as the story gets to giving away the identity of the mastermind of the plot.

Duo Damsel gets to put her powers to use, infiltrating Kandro Boltax’s office and discovering secret info on the water purification plant (remember that?), which has been used to chemically control the minds of people on Earth.

Brainiac 5 devises an antidote, and Invisible Kid’s team leads an assault on the water plant, while the imprisoned Legionnaires manage to break out on their own. 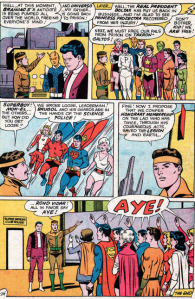 Everyone comes together as Boltax is revealed to be Universo in disguise, and the son, who managed to get the cure into the water, is, of course Rond Vidar, who is granted honourary membership at the end of the story.

Despite Universo not appearing, except in disguise, for the bulk of this 2-parter it works very well.  The story would heavily influence an 80s Legion tale, The Universo Project – in fact it would be the very similarities that would alert the Legion members to Universo’s actions in that tale.

Adventure 359 – The Legion gets outlawed

Jim Shooter and Curt Swan pull off another unusual but very effective 2-parter, beginning in Adventure 359 (Aug 67), which sees the Legion outlawed, disbanded, and imprisoned. 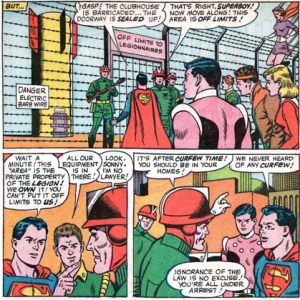 The Legion return from a mission in space to discover that they have been outlawed, disbanded by the government, and their Clubhouse sealed.  They are arrested for breaking a curfew none were aware even existed.

Duo Damsel gets the story from her parents.  After the death of the president of the United Planets, his vice-president, Kandro Boltax (in his debut appearance) took the reigns of government.  First he built a new water purification plant (gee, will that be significant later?), and then passed a number of draconian laws, including the ban on the Legion, which were supported en masse.

When Dream Girl foresees a monorail crash, a number of Legionnaires go into action to save the passengers, which results in them being arrested and sentenced to the prison planetoid, now called Takron-Galtos.

The ones who were not sentenced wind up in the middle of a riot, during which Princess Projectra is critically wounded, winding up in a coma.

Invisible Kid tries to keep the remaining Legion together, to figure out what is going on, but discovers that even his parents have turned against him, and are spying on him.

He leads the remainder of the team to RJ Brande, whose support founded the Legion, but even he has turned against them, and summons the Science Police.

On the run now, hiding out in the sewers, the Legion decide they must do whatever they can, willing to break the law to figure this situation out and return things to normal.

The story concludes next issue.